The streets of Seoul are expected to be crowded with Chinese tourists during this year’s Lunar New Year holiday, while many Seoul citizens are emptying the city for foreign destinations.

Koreans traditionally spend the two national holidays of Lunar New Year and the autumn harvest festival, Chuseok, in their hometown with family members and friends. This year, the New Year, according to the lunar calendar, begins on Jan. 23.

However, as households are shrinking in size and family gatherings are becoming less of an obligation than in the past, young people in particular are taking the minimum three-day holiday as an opportunity to take a vacation overseas.

This year, the Ministry of Land, Transport and Maritime Affairs expects overseas travel during the upcoming three-day Lunar New Year holiday to reach an all-time high.

The ministry said that from Jan. 20 to Jan. 25, a total of 240,000 travelers are expected to leave the country, according to flight reservations on domestic airlines made as of last Thursday. The number is 34,000 higher than last year, when the holiday period was longer due to it being appended to a weekend.

The number of travelers to Japan, on the other hand, dropped by 4.6 percent compared to 2011 because of the massive earthquake that hit the island country last March and the rising value of the yen against the won.

“Because this year’s Lunar New Year holiday falls during the winter school vacation, more families are taking the opportunity to head overseas,” said an official from the land ministry.

If foreign airlines are added, the total number of outbound passengers this year jumps to 365,000.

And proportionally more reservations are being made for short-haul flights as demand rises for destinations like China, Japan and Southeast Asia. Jeju Air’s route from Incheon to Osaka, Japan, has already been fully booked, while the reservation rate for its flights to Nagoya, also in Japan, Bangkok, and Cebu, in the Philippines, stands at 99 percent. 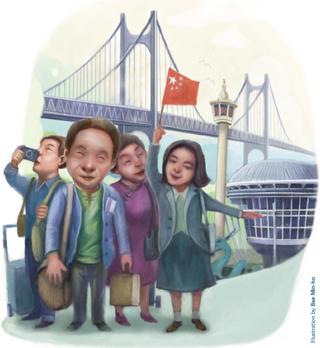 Flights offered by Air Busan are also almost fully booked, with reservation rates of 92 percent to Taipei, 86 percent to Hong Kong and 85 percent to Cebu.

Park Yu-mi, a 28-year-old worker, said she is heading to Osaka because she could not resist the “various promotions and events airlines are issuing during the holiday season.”

From Monday until February, for example, Jeju Air is offering a two-for-one deal for every female who books a ticket from Gimpo to Nagoya.

The second ticket must also be for a female passenger on the same flight.

While hordes of Koreans are set to leave the country during the holiday, legions of Chinese tourists will be traveling in the opposite direction, their interest piqued by the Korean Wave, local cosmetics in the shopping district of Myeong-dong and Korean cuisine, among other reasons.

The Chinese celebrate their own New Year holiday at the same time as Korea but for a longer duration, from Jan. 22 to Jan. 28. 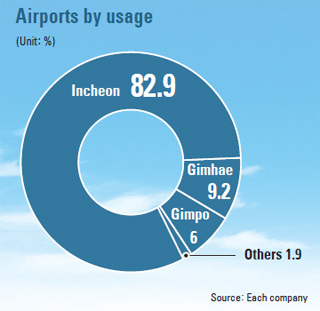 Meanwhile, Korean retailers are looking to capitalize on the injection of Chinese money as tourists from the country are emerging as bigger spenders than their counterparts from Japan, a spending spree that some hope will offset their declining sales led by the worsening state of the domestic economy.

Local department stores expect to see long lines of Chinese in front of luxury brand stores. Lotte Department Store, the country’s largest retailer, said it will post stickers with greetings in mandarin on its doors from Friday to not let the opportunity pass it by.

It also plans to advertise in Chinese newspapers on the same day with photos of Hallyu stars such as 2AM and actor Kim Beom.

Hyundai Department Store said it will hold a grand sale offering Chinese travelers discounts of up to 30 percent until February, but Shinsegae aims to upstage it by slashing up to 50 percent off its products, a deal that will be available to all shoppers.

Chinese will also be heading to Jeju. The self-governing island’s tourism board said that during the Chinese holiday season, a total of 17,000 Chinese tourists will visit, up 94.6 percent from last year.

“In 2011, Chinese tourists avoided traveling to South Korea because of safety concerns linked to North Korea’s artillery attack on Yeonpyeong Island,” said an official from the association, explaining the surge.

The official said their numbers are likely to surge throughout the country from last year.

And with Pyeongchang winning its third bid to host the Winter Olympic Games, which are due in 2018, the tourism industry expects more Chinese to visit the host province of Gangwon, as well as Gyeonggi, which encircles Seoul and often picks up much of the overspill when hotels in the capital cannot cope.