Ministry for SMEs would give them a voice: Kbiz

Ministry for SMEs would give them a voice: Kbiz 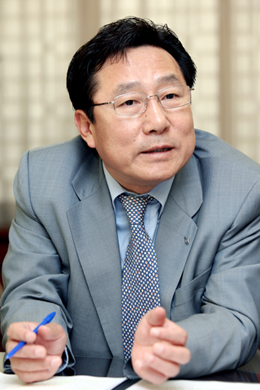 Kim Ki-mun, chairman of the Korea Federation of Small and Medium Businesses (Kbiz), has urged the government to establish a ministry that both handles the affairs of SMEs and gives them more of a voice in policy matters.

“SMEs play a pivotal role in the Korean economy and their role will grow in the future,” Kim said in his first press conference of the year yesterday. “As such, their opinions should be better reflected when policy makers hammer out economic policies. To make this happen, a new ministry is necessary.”

He recommended upgrading the status of the existing Small and Medium Business Administration to that of a ministry.

While Kim praised the government’s efforts to support SMEs, including producing a list of dozens of items that only small businesses can trade in last year, he emphasized the need for shared growth to become a permanent fixture.

“Conglomerates are jumping into industries that SMEs have worked hard to cultivate whenever the former see SMEs making a lot of money, and smaller firms are powerless to stop this encroachment,” Kim said.

“To break this sense of imbalance in the market, the Commission on Shared Growth for Large and Small Companies should have more items restricted to SMEs. It currently selects restricted items in the manufacturing sector, but the yardstick should be expanded to the retail sector as well.”

According to Kbiz, there were about 18,000 such small bakeries in 2003, but this number plunged to 4,000 in 2011 as franchise brands like Tous Les Jours - run by CJ Foodville, an affiliate of CJ Group - and Paris Baguette, run by SPC Group, began to dominate the landscape.

“Bakeries and coffee shops are not conglomerates’ core business, and they are more suitable for ordinary people who want to start their own businesses,” a Kbiz official said.

“Even daughters of conglomerate owners have begun entering the bakery business by rolling out high-end brands, and this is driving smaller outfits out of business.”

At least four high-profile scions of Korea’s captains of industry have dived into this segment.

Lee Boo-jin, president of both the Hotel Shilla and Samsung Everland, runs the luxury bakery brand Artisee through an affiliate of the hotel. Lee is the eldest daughter of Samsung Electronics Chairman Lee Kun-hee.