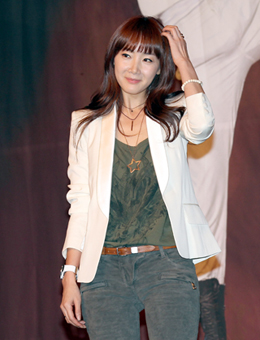 Actress Choi Ji-woo’s father was a military man, it has been revealed. On an episode of MBC’s “Section TV Entertainment Show,” which aired on Jan.15, the show named Choi, as well as actress Shim Eun-ha and singers Lee Jang-woo and Yang Hee-eun, as a few of the hottest Korean celebrities to have a soldier father.

Meanwhile the Hallyu star recently wrapped up filming a commercial commissioned by the Visit Korea Committee, an organization that promotes Korea to foreign audiences. The commercial, titled “To you who is so precious, I give you Korea,” was filmed on Jan. 11. According to a representative from the committee, the advertisement aims to “solidify Choi’s image as a Hallyu star while increasing awareness about Korea.”

“I hope that foreigners who visit Korea will be able to feel the warmth of the nation as well as receiving many incentives,” said Choi, referring to the many incentive deals offered to non-Korean tourists in the advertisement she recorded.

Choi has also been promoting the committee’s “Korea Grand Sale” for the past two years. The advertisement is currently being promoted and encourages people to visit Korea between Jan. 9 and Feb. 29 to take advantage of the sale.