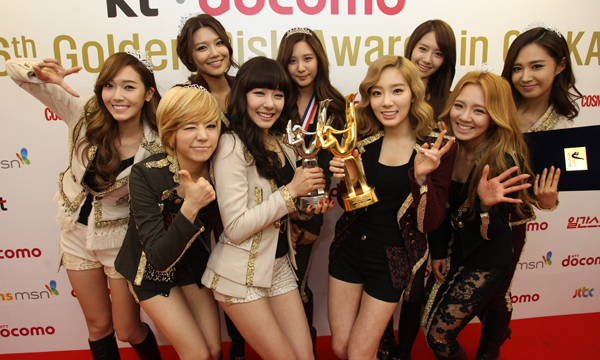 Girls’ Generation performed its first solo concert in Hong Kong on Jan. 15, performing hit songs such as “Genie,” Mr. Taxi,” “Oh” and “The Boys.” In total, the nine-member group sang some 32 songs for their fans.

Hong Kong fans also were excited to welcome the girls and unfolded a sign that read “You+Me=Complete” and released countless pink balloons as the concert drew to an end.

Ahead of the performance when the group arrived in Hong Kong late in the evening on Jan. 14, fans flocked to the airport to catch a glimpse of the girls.
Local media also attended a press conference held by the band on Jan. 15.

Meanwhile in Japan, the Girls’ Generation is gaining popularity, and on Jan. 16., Oricon Japan announced that its first Japanese album has sold some 780,000 copies since being released in June. It is listed as a top-10 album on the Oricon weekly chart.