[Sponsored Report] Survey sees increases across the board

[Sponsored Report] Survey sees increases across the board 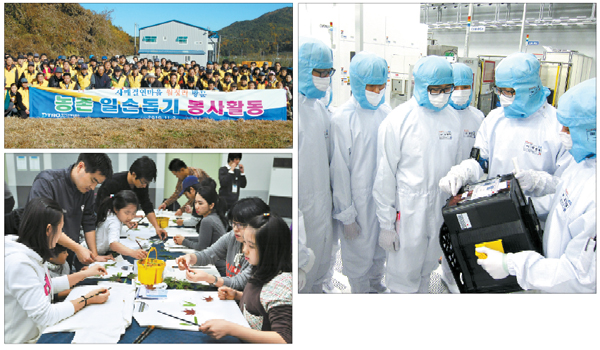 The Korea Productivity Center and University of Michigan conducted the NCSI (National Customer Satisfaction Index) survey to see how happy consumers are with various products.

According to the survey, Yeungjin College received 88 points and ranked first, while Yeungnam College of Science and Technology followed in second place (88 points), Samsung C&T Corporation ranked third (86 points), Daelim were fourth (85 points) and Daegu Metropolitan Transit Corporation and Hotel Shilla came in fifth and sixth respectively. If the annual score between companies is the same decimal points will determine the ranking.

A total of nine out of the 12 economic fields in the survey showed an increase and out of 56 industries 35 reported results that were higher than last year. One of the reasons cited for the increases was fierce competition and the efforts of the companies to meet the customer’s demands and improve customer satisfaction.

In the case of the telecommunication industry, which is going through a heightened phase of competition, the NCSI increased 0.6 points. This is due to the various efforts of the companies in introducing new products and services that fulfill the demands of current clients as well as attracting new clients. Due to this competition the average NCSI score is higher than previous years. 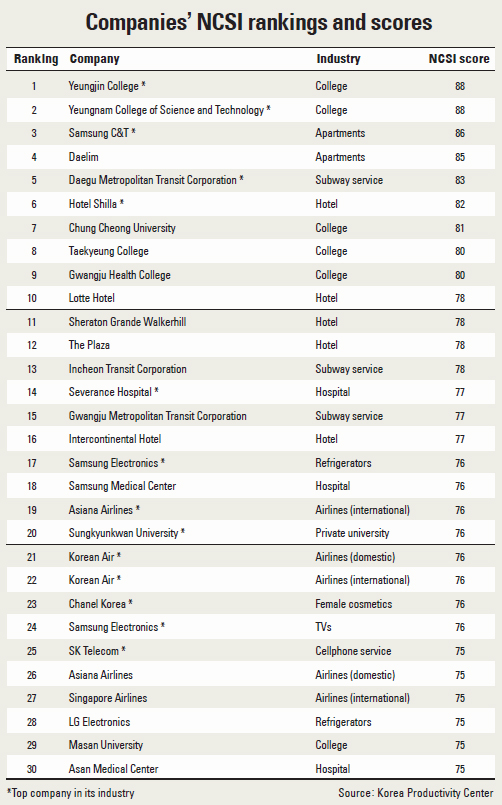 There are numerous examples of the impact that these changing attitudes to marketing and competitiveness. Companies that have long been ranked at the top of the NCSI are now constantly changing and across 14 industries it is common to see companies sharing top spot, again highlighting how competitive the companies have been when it comes to client satisfaction.

In the airline industry Asiana Airlines and Singapore Airlines have long been ranked first in the index for domestic and international airlines, respectively. This has changed to Korean Air (domestic) and Korean Air/ Asiana Airlines (international). In the telecommunications industry SK Broadband has shown a rapid advance and currently rank top with KT.

In other industries Paldo’s Kokomyeon leads the ramyeon market along with the long-time top ranked Nongshim. In fact in fields as diverse as discount chains, TV home shopping networks, life insurance, banking and colleges, more than one product often shares top spot, showing how many companies have greatly improved various aspects of their business.

The survey was conducted among 73,055 direct customers of 274 companies and public organizations across 61 industries in 2011. The customers are mainly from the five major urban areas in Korea (Seoul, Busan, Daegu, Daejeon and Gwangju) who have purchased and used the services mentioned. However the survey for industries including subway, domestic and international airlines, theaters, apartments, soju, family restaurants, libraries, large discount stores, hotels, hospitals, national universities, private universities and colleges were not restricted to the five cities.