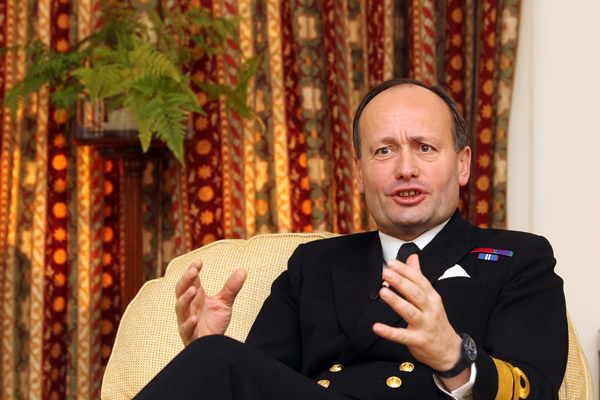 Neil Morisetti. Climate and Energy Security Envoy of the U.K.


Asia and Africa are the two regions most vulnerable to climate change, and these changes could spark a massive influx of North Korean refugees into South Korea and China, according to Neil Morisetti, climate and energy security envoy of the U.K. government.

Speculation is rising that climate change is not just an environmental issue, but a crucial factor that affects national and global security, fueling conflicts such as food shortages, mass migration, civil wars and terrorism.

While many countries are not aware of the link between global warming and national security, the U.K. is one of the few nations that recognizes the potential climate crisis and created a unique envoy position in 2009, appointing Morisetti to the position.

The rear admiral, who has visited South Korea three times, stressed in an interview with the Korea JoongAng Daily at the British Embassy in Seoul the importance of the issue and how it could pose strategic challenges in coming decades. He also discussed preparations for dealing with the potentially catastrophic results and efforts to pre-empt them.

Q. What is the relationship between climate change and national security?

A. As well as having an environmental, socioeconomic impact, potentially, climate change will impact on global stability. That doesn’t mean that we see climate change as a direct cause of conflict; rather, it’s the issue of the second sector of the conflict.

The rising sea level is a reason, as this impacts a lot of land and many people’s livelihoods. Research shows that a rise in temperature of 1 degree Celsius can result in a 10 percent drop in crop production. If the sea level comes up, people might lose their land. So what do they do? Do they find an alternative livelihood? Do they move? People could possibly turn to crime or terrorism.

Similarly, migration can be perfectly accepted between countries, but it could add more pressure to the existing structure between countries. We could also see food shortages, water shortages, health problems and democratic challenges. The problem is that we live in a globalized world. We are dependent on each other, so any impact on one part of the world could spread to another part.

So when you say “security,” you are referring to living conditions rather than military security?

Yes. Global security. The reason why we, the military, are interested in this is because not only must we worry about current threats to our nation, but we must also have an eye to the future. The inter-dependency among countries we saw with the flooding in Thailand recently had an impact on the United Kingdom, because car manufacturers such as Honda and Toyota were there, and we couldn’t get their vehicles out of Thailand and into Europe. It’s a very simple example, but it shows how we’re linked.

If you had to pick one region that is most seriously affected by climate change, what would it be?

I think, perhaps, Asia, including Korea, and Africa. But also in South and Central America, where there are issues such as the increasing temperature reducing crops. So it’s very much a global issue.

How do you think climate change will impact the East Asia region?

I think one of the problems is that the increasing temperature has an impact on crop fields. In North Korea, we already knew that the country has food shortages, which might put pressure on migrants coming to the South or China. There are issues related to water in Asia - shortages of water, particularly. I talked with my colleagues in Bangladesh and they are concerned about rising sea levels, because they will have to move people because of the loss of their lands, and how they will accommodate them in their cities. If Bangladesh can’t accommodate the people, they would have to talk to India, and ask it to accommodate them. So the effects start to spread, not just in one country.

Could you elaborate on what influence climate has?

Increasing temperatures result in melting glaciers and flooding or drought. For example, in Africa, near the Nile, there are shortages of water. Russia has lots of weak crops due to extreme weather changes. We know that climate change also partly contributed to the Arab Spring, their uprising, caused by food shortages. It is a very complex picture. It is not possible to point to any one event to say it’s due to climate change.

You said that climate change contributed to the Arab Spring. Does it always have negative consequences?

You are right. We tend to focus on the negative too much. I think the impact of climate change overall is negative, if we do nothing about it. But if we take action, there could be other [more positive] opportunities, as well.

For example in South Korea there are green growth programs, which bring new jobs for prosperity - a new way of developing the economy.

We are committed to spending a lot of money on infrastructure programs over the next five years, about half of which will go on green growth, which generates jobs, to combat the economic downturn.

So while the climate itself, of course, is a challenge, adapting to this change does bring opportunities.

Was it a big jump to accept this role, coming from a naval background?

We look at this as the responsibility of economists, diplomats and, perhaps, the military to resolve. The threats actually require action from all areas of government, not just one department. We need to work together.

We also need to work with society, nationally and internationally.

Although I’m a military officer, I also work for foreign affairs and climate change. So I have cross-government responsibilities, and that enables my colleagues and my department to work together.

This is your third time in Korea. What is your main reason for coming this time?

One is to learn more about what is happening in Korea, and how we can work closer together. After staying two days here, I will visit Japan. We are going to be busy, meeting with government, military, think-tanks. This visit is just for Korea and Japan, but I’ll be next week in America, Canada, India, Pakistan and European countries.

Can you elaborate a little on your responsibilities?

My job is quite wide-ranging. One role is engaging with international governments, academia and media to ensure we recognize all the social, economic and environmental issues that are related to climate change, and how these issues impact on global stability.


What is the pressing task for other countries? Should they also appoint climate envoys?

I think the first thing is that you have got to recognize [dealing with these issues] is essential to global stability, human well-being and the interests of our nations. The next priority is to recognize we are technically in it together, within countries and between countries. And in doing so, we share our understanding of what the problem is, where the great risks are.

Korea is promoting green growth, but the public has not yet been won over. Is it a tough sell?

It’s easy if you look in the very short term. It creates jobs. For instance, developing offshore wind stations creates jobs, and at the same time, it increases renewable energy for power generation. We are looking at building infrastructure for low-carbon technology. In the longer term, it not only creates jobs, but saves lives.