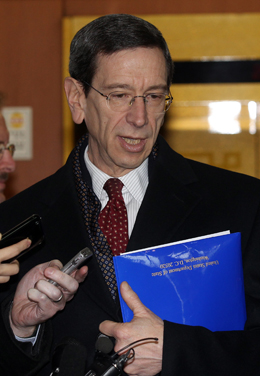 The U.S. envoy in charge of sanctions on Iran and North Korea told Seoul yesterday to cut its imports of crude oil from Iran.

It was the first time Washington directly made such a demand.

Robert Einhorn, the U.S. State Department’s special advisor for nonproliferation and arms control, said in a meeting with Kim Jae-shin, deputy foreign minister, at Seoul’s Ministry of Foreign Affairs and Trade that Washington is making the demand of all its partners.

“We are urging all of our partners to help us, to work with us in putting pressure on the government of Iran to get it to negotiate seriously,” said Einhorn during the meeting. “We are urging them to reduce their purchases of crude oil from Iran and to unwind their financial dealings with the central bank of Iran.”

Einhorn urged Seoul’s cooperation, saying that the sanctions on Iran are related to the North Korean nuclear issue. “We believe that our national interests converge on this matter, and we hope to get cooperation,” he said.

He said Washington is aware of the worries other countries have about the effect on their economies and said that Washington wants to achieve its goal without disrupting the global crude oil market.

Later the day, Einhorn and Daniel Glaser, the U.S. Treasury Department’s deputy assistant secretary accompanying Einhorn, visited the Ministry of Strategy and Finance and the Ministry of Knowledge Economy in Gwacheon, Gyeonggi, and sought cooperation from them on the same demand.

“Both sides exchanged a wide range of opinions with each other on how the U.S. implements and how both sides cooperate,” read a joint government press release yesterday released by the Foreign Ministry, Finance Ministry and Knowledge Economy Ministry. “The U.S. side said it will actively cooperate with our government .?.?. while sufficiently taking the interests of our country and our companies into consideration.”

The two sides will have additional talks based on the discussion yesterday, the press release said, without mentioning when the next talks will be.

The Korean government increased sanctions on Iran last month by adding more than 100 Iranian entities and individuals to its trading blacklist.

It was Einhorn’s second visit in two months. This time, Einhorn came to seek cooperation on a U.S. Congress-initiated defense funding bill signed into law on Dec. 31 that bars foreign financial institutions dealing with Iran’s central bank from doing business in the U.S.

“The entire international community is moving towards reducing its reliance on Iranian oil and moving towards isolating the central bank of Iran,” Glaser told reporters after the meeting with Kim. “And we’ve already had some very good discussions on this with the government of Korea. We’re looking forward to more discussions in the days and weeks to come.”

Both Einhorn and Glaser said that Washington imposes no rigid deadline for Seoul or other allies to follow on their cuts.

“We share sympathy with the U.S. about the purpose of the Iran sanctions and said we will keep cooperating with the international community on them, but we explained that it is difficult to radically change the channels of importing crude oil as we depend [on Iran] for around 10 percent of oil imports,” Foreign Ministry spokesman Cho Byung-jae told a media briefing yesterday. “We explained that we will try to minimize the impact of our cooperation on our economy.”

Asked whether Seoul is talking with other oil-producing countries about increasing imports, Cho said that the government is trying to come up with a comprehensive measure with regards to Washington’s demand. He didn’t name any other possible source of oil.

Iran is threatening to close the Strait of Hormuz, a vital oil passageway, in response to the sanctions.