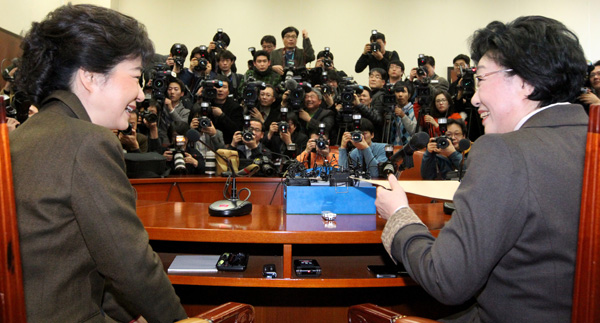 
The ruling and opposition parties yesterday agreed to revise the country’s election law to adopt an open primary system to allow the public to participate in candidate selections of the two parties for the April legislative elections.

The Democratic Unity Party’s Han Myeong-sook yesterday paid a visit to the Grand National Party’s interim leader Park Geun-hye to talk about cooperation between the rival parties on political reform. The tete-a-tete resulted in an agreement that the current election law should be revised to introduce open primaries, in which the public is invited to vote along with party members.

“For the advancement of politics, we decided to adopt the open primaries to return the nomination rights to the people,” Park told Han during the meeting, which took place in her office at the National Assembly.

“There is an explosive demand that the public wants to exercise their rights,” Han said. “When we return the nomination rights to the people, we will see a desirable nomination revolution. I hope the two parties can work this out successfully.”

Until now, both parties have nominated their candidates through in-house nomination committees. In a move to salvage the sinking ruling party ahead of the April general election, the GNP leadership led by Park said Monday that it wanted to select its candidates through an open primary, along with other nomination reform measures. Rating incumbent lawmakers and refusing nominations to the least popular 25 percent was also planned.

Park suggested to Han that the two parties hold open primaries on the same day, and Han said the idea was attractive.

Han added that the DUP wanted to allow the public to vote via mobile phones, as they did in Sunday’s DUP leadership election, which Han won. She showed Park a document describing the DUP’s proposal for an open primary.

The GNP is less enthusiastic about mobile phone voting than the DUP.

It remains to be seen if the two parties will be able to narrow down their differences on the primaries in time for
the general election, which takes place in three months. The two sides are expected to begin discussions today at the Special Committee on Political Reform.

Although Han had recently called Park “a daughter of the dictator Park Chung Hee” and promoted herself as the only competitor capable of matching her as a politician, the meeting of Korea’s two most powerful female political heavyweights started amicably, accompanied by laughter and words of blessing.

They both spoke candidly about heading their parties’ reform efforts ahead of the elections and what it was like being female politicians.

“I came here with the understanding that things would be tough for you because joy is transient while hardships come swiftly,” Han told Park.

Park’s replied, “I agree with you. Let’s cooperate.”

But there were moments of tension during the 10-minute tete-a-tete.

Han asked Park to cooperate with the DUP’s plan to revise the election law with an aim to rescue former Democratic Party lawmaker Chung Bong-ju, and Park’s face hardened briefly.

In December, the DUP proposed a revision to the election law to allow more freedom of expression during campaigns, which is supposed to be retroactive. If the revision goes through, Chung would be freed from jail. In December, Chung was convicted of spreading false rumors during the 2007 presidential election about Lee Myung-bak, then the GNP’s presidential candidate.

The former lawmaker, better known as the co-host of a popular podcast dedicated to taking potshots at President Lee, was sent to jail for one year. The DUP said they will do everything to rescue him.