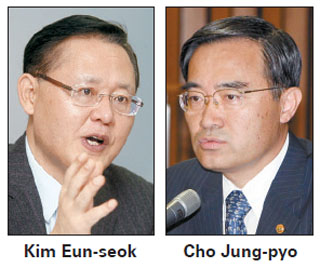 It seems that no one’s really sure how many diamonds are in the mines of Cameroon.

The Ministry of Foreign Affairs and Trade suspended a high-ranking official of the ministry from his daily duties last week after a series of media reports revealed his role in a diamond resource scandal was more involved than originally thought, a ministry official told the JoongAng Ilbo on Monday.

Kim Eun-seok, ambassador for energy and resources, has been under investigation by the Board of Audit and Inspection regarding an allegation that he contributed to inflating the stock prices of CNK International, a Korean company developing diamond mines in Cameroon.

It is rare for a government agency to suspend the duties of an official involved in an alleged illegality before the board has announced the results of the investigation.

The board, with the help of the Financial Supervisory Service, is thought to have discovered that Kim’s younger brother and some of his relatives purchased stocks in CNK worth more than 100 million won ($87,123).

“As testimonies and circumstantial evidence flood in, we thought it is better to take caution and ordered him to step back from the work until the board completes its audit,” an official of the ministry told the JoongAng Ilbo.

Kim was known to have played a central role in drafting a problematic press release in December 2010 that promoted the company’s diamond deal.

“CNK secured the rights to develop diamond mines in Cameroon where at least 420 million carats of diamonds are estimated to be buried,” the press release read.

CNK had landed a contract to develop 91 square miles of land in the African nation. At the time the ministry said the deal was an exemplary example of cooperation between the government and the private sector in securing business opportunities abroad.

The Lee Myung-bak administration was pushing for resource diplomacy, or diplomacy coordinated with private businesses that focused on securing natural resources deals in resource-rich countries. After the press release came out, the stocks of CNK rallied upward over the next several months.

However, doubts spread concerning a sizable existence of diamonds in Cameroon and politicians began assaulting the company and the government, suspecting foul play. In a parliamentary audit of the government last year, lawmakers of the largest opposition Democratic Party and the ruling Grand National Party claimed that CNK exaggerated the business potential of diamond mines when it acquired the rights to develop them from the government of Cameroon.

The scandalous case grabbed more attention in the media and the public in Korea as the lawmakers suspected Park Young-joon, a former second vice knowledge economy minister, to be involved. Park, one of the most influential aides to President Lee, was the director of the Prime Minister’s Office at the time. He led a high-profile Korean government emissary to Cameroon in May 2010 after Kim reported to him that there were lucrative diamond mine deals being discussed between a Korean company and the Cameroon government.

The board has investigated Park but hasn’t found any evidence proving Park’s involvement.

“The Prime Minister of Cameroon told me that a Korean company was participating in development [of diamond mines], so I only said, ‘please help the Korean company.’ That’s it,” Park told the JoongAng Ilbo by telephone. Park said he thinks Kim is only to blame for his drive to get his job done. Some of those who know Kim well said they were surprised by the allegation that points to Kim as a main culprit in the case.

Kim is considered a diligent diplomat. He has mainly worked in political affairs areas as a security policy director, North America advisor, and minister in Korean consulates in Washington. Others suspect that Kim’s motive was not so much greed but to please his former boss Cho Jung-pyo. Cho reportedly bought and later sold 260,000 shares in CNK for a 1 billion won profit.

The JoongAng Ilbo talked with Kim in two telephone interviews on Monday. Kim denied all allegations of wrongdoing. Regarding the suspicion that his brother and brother’s wife purchased the CNK stocks, he said he has nothing to do with it.

“I am exhausted [with this case],” Kim said. “I have done nothing wrong.”