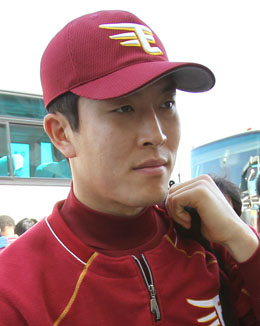 “We have been looking to sign Kim since 2009,” said Lee Jang-seok, the club president. “Acquring Kim is part of our efforts to make Nexen a stronger ball club and we think his experience and abilities will bring good results.”

The Heroes had the right to sign Kim in a special draft for players based overseas in 2007, which was transferred by the Incheon Hyundai Unicorns. The Unicorns collapsed due to financial difficulties in 2008 and the club was reborn as the Heroes with new corporate ownership.

Manager Kim Si-jin said he hasn’t decided what role Kim will play, but welcomed the singing of the MLB closer. The clubs said Kim is currently staying in California and is scheduled to arrive in Korea tomorrow before joining spring training in Arizona.

Kim, who will celebrate his 33rd birthday today, has been one of the top Korean pitchers in MLB along with Park Chan-ho, who is now with the Daejeon Hanwha Eagles, but at the same time has been known as a “maverick” and “journey man” during his career.

Kim helped Korea win the gold medal at the 1998 Asian Games and got exemption from his military service.

In 1999, during his sophomore year at Sungkyunkwan University, Kim signed with the Arizona Diamondbacks and made his big-league debut the same year.

Kim enjoyed early success, winning the World Series in 2001 and becoming the first Asian to play in a title-winning series. In 2002, he had a career-high 36 saves with a 2.04 ERA for the Diamondbacks and was selected as an All-Star that year.

The submariner moved to the Boston Red Sox in the middle of the 2003 season and also earned another World Series ring in 2004, becoming the sole Asian player to contribute to an MLB title in both the American and National leagues.

Kim was traded to the Colorado Rockies in 2005, which began a rocky end to his MLB career. He was a starting pitcher for the Rockies, but was later traded to the Florida Marlins in 2007. He briefly rejoined the Diamondbacks that same year, but eventually returned to the Marlins. Despite moving teams three times in 2007, he collected 10 wins and became the second Korean pitcher behind Park Chan-ho to claim two-digit wins in a season.

But after 2007, Kim failed to return to the mound in a MLB game. In 2008, the pitcher signed with the Pittsburgh Pirates for one year, but was released before the season started. The same misfortune happened again two years later with the San Francisco Giants.

Kim played in Japan’s Nippon Professional Baseball last year with the Tohoku Rakuten Golden Eagles, but never made it to the first-team roster due to a persistent ankle injury. He was released last November.