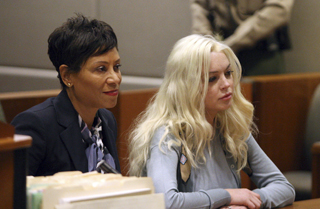 LOS ANGELES - Lindsay Lohan received her second favorable probation report in a row and a judge told the actress that she appears to be on track to complete a strict program by the end of March.

Lohan appeared in court for less than five minutes Tuesday to update the judge on her progress in completing strict probation terms that were imposed in November after a series of missteps by the actress.

By all accounts, the rigid program has benefited Lohan, with Superior Court Judge Stephanie Sautner telling Lohan that she received favorable reports from probation officials and her community service program. Lohan is doing mandatory cleanup duty at the county morgue and attending frequent psychotherapy sessions, with Sautner requiring Lohan to appear in court monthly for updates.

“Just keep doing what you’re doing, you appear to be doing it well,” Sautner told Lohan.

The “Mean Girls” star will have to work at the morgue 15 times before she returns to court on Feb. 22.

Sautner said Lohan appears to be on track to complete morgue duty and court-mandated therapy by March 29, just shy of five years after the actress’ problems began with a drunken driving arrest on Memorial Day weekend in 2007. After that, she will probably be placed on informal probation that won’t require court appearances.

She has struggled with the terms of her sentence since then, prompting judges to send Lohan to jail and rehab repeatedly. Tuesday’s hearing marked the second straight hearing in which the actress wasn’t on the receiving end of threats of further punishment.