Lee Jung-jae says he and Daesang heir are just friends

Lee Jung-jae says he and Daesang heir are just friends 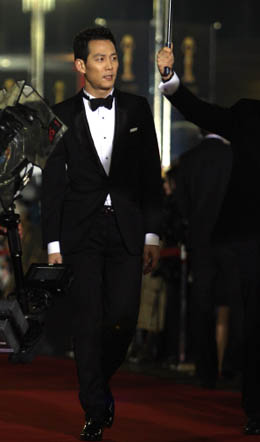 Actor Lee Jung-jae has spoken out against the rumors surrounding himself and Lim Sae-ryung, who is the granddaughter of the honorary president of Daesang Group and the ex-wife of Samsung Group heir apparent Lee Jae-yong.

“I can’t stand it anymore; I received calls from friends this morning asking if I was getting married to Lim Sae-ryung,” Lee told Ilgan Sports yesterday. “This ridiculous situation has probably gotten worse because I didn’t speak out sooner. I can’t stand to see my parents getting harassed by the press, so I will look into getting a lawyer to get to the bottom of these rumors.”

Rumors about Lee and Lim began in 2010 and escalated to include the speculation that they were engaged. There were also rumors that they had bought two buildings facing one another. Lee insists that all of the rumors are ridiculous.

“The building I own is in Sinsa-dong and the one Lim owns is in Cheongdam-dong, so it makes no sense,” he said.

He also refuted the rumor that the two had traveled to the Philippines together in 2009, saying that he had flown in economy while Lim was in first class.

Lee did confirm that the two are acquaintances and met through friends in the fashion industry.