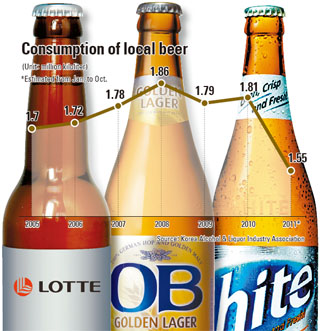 Lotte Chilsung yesterday signed a memorandum of understanding with the Chungju Metropolitan Government to build a beer factory in Chungju, North Chungcheong.

“We do not yet know when customers will get to enjoy Lotte’s first beer because even though the factory will be finished in 2017, that does not mean production will be able to begin immediately,” said Yoon Soo-han, a public relations official told the Korea JoongAng Daily.

“Producing a new beer requires a lot of research and development. Although we can’t provide an exact time frame for when our first directly produced beer will hit the shelves, we are sure the quality and taste of Lotte beer will satisfy drinkers who have been looking for something new,” Yoon added.

Lotte officials said Chungju was chosen over other candidate sites due to logistical and other benefits associated with the location. According to industry sources, other options that were ultimately rejected include Gimcheon, in North Gyeongsang, and the newly built Sejong City in South Chungcheong.

The final choice is linked to Jungbu Expressway and close to the city’s water storage dam - making it a prudent pick in terms of servicing the company’s transportation and resource needs.

Lotte Chilsung currently runs a soju business with its Cheoum Cheoreom (“Like the First Time”) brand, which it acquired from Doosan in 2009. The brand ranks second in the Korean market after Chamisul, which would roughly translate into English as “Pure Dew.”

Lotte also runs a beer business in partnership with Japan’s Asahi and distributes the brand’s beers in Korea, but it has yet to produce its own.

Industry sources said Lotte has been harboring ambitions of jumping into the beer market for some time, but that it seems to have changed tack by moving to start its business after it failed to acquire Oriental Brewery in 2009.

At the time, Lotte lost a bidding war against private equity firm Kohlberg Kravis Roberts , which purchased the beer manufacturer for $1.8 billion.

A Lotte official was quoted as saying by Yonhap News Agency yesterday that acquiring Oriental Brewery has become problematic because its price has gone up dramatically in just a few years.

But Yoon of Lotte told Korea JoongAng Daily that the report is exaggerated, leaving room for a potential acquisition in the future.

“The issue is complicated ... but if the price of OB Brewery is within what we consider acceptable, we could pursue an acquisition as we have been looking into buying the company,” Yoon said.