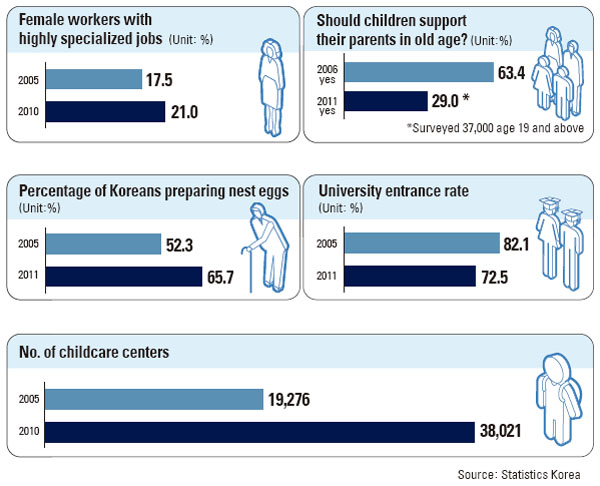 Korean society has changed notably over the past few years, shifting from its conservative Confucian beliefs to embrace Western values, according to a report released by Statistics Korea yesterday.

One of the highlights of the report on social trends in various sectors, including education, labor and consumption, is the light it shines on women’s deeper involvement in high-paying, specialized jobs - a trend barely imaginable in recent decades, when gender inequality was widely accepted.

As a proportion of the total female workforce, the number of women engaged in highly specialized jobs, such as those in the legal and medical sectors, jumped from 7.7 percent in 1990 to 21 percent in 2010.

Meanwhile, women in the service and sales sectors dropped 33.6 percent to 31.8 percent, while those in technical posts declined from 25.8 percent to 23.4 percent over the same period.

“This reflects how more Korean women are becoming highly educated than in the past,” said Park Si-nae, an official from the agency’s statistics development department. “They are also delaying when they marry, thus giving them more time to build their careers.”

With more women engaged in the overall workforce, the report also revealed that demand for children’s day care centers has shot up. The number of centers doubled to 38,000 in 2010 from just over a decade earlier.

The report also showed that more Koreans are preparing nest eggs for when they retire. Of those surveyed, 65.7 percent were preparing for their golden years as of last year, considerably higher than the 32.9 percent who provided the same answer in 1998.

The growing need to prepare for life after retirement comes as an increasing number of people wish to live separately from their children when they stop working. The national statistics bureau said the proportion of parents willing to live with their kids in old age dropped to 29 percent from 53 percent over the decade from 2002 to 2012.

Based on deeply embedded Confucian beliefs, Korean families have long considered taking care of their parents as they grow old as one of their principal duties in life.

The number of single-member households among people aged 65 and up grew to 34 percent last year, up from 20 percent tallied in 1990, according to the report.