Oil prices cause alternatives to bubble to surface

Oil prices cause alternatives to bubble to surface 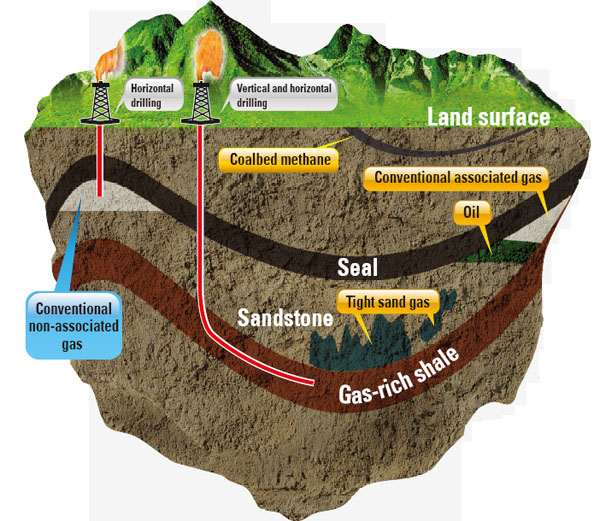 Shale gas and oil, bituminous oil - or tar sands - and other less conventional forms of fuel are becoming the next big thing and reshaping the development of natural resources as regular oil prices continue to skyrocket.

Korean oil companies, as well as their counterparts in other countries, are increasingly turning to these to save costs, buying up new oil fields and companies that specialize in extracting the resources.

The state-run Korea National Oil Corp. (KNOC) invested $1.55 billion to acquire a 23.7 percent stake in the Anadarko Petroleum Corp. last March. It plans to start producing shale oil next year. Anadarko, based in Texas, is considered an expert in exploring and developing shale gas and oil fields.

The KNOC is also building an oil sands production facility in Alberta, Canada, as part of a $300 million project called BlackGold. It intends to produce 10,000 barrels of heavy oil a day from next year, after it first drilled the site in 2007. From late 2015 it will triple production, it said. Korea consumes 2.3 million barrels a day.

Until two decades ago, unconventional oils like these were largely ignored due to their high development costs and the technological difficulties associated with excavation. But they have become hugely popular in the last few years as technological advancements have facilitated their development, and the price of international crude has risen above $100 per barrel, making it more profitable to produce them.

“Oil sands are largely undeveloped and the reserves are enormous,” said Kim Sang-woo, an oil sands manager at the KNOC. “Canada is known to have the largest reserves, estimated at 172.7 billion barrels.”

“If it costs between $40 and $60 to produce a barrel of bituminous oil, then it would be considered profitable and worthwhile,” Kim said. “Now the international crude oil price is hovering above $100 a barrel, so the oil sands industry is booming.”

Lee Dal-sok, a senior researcher at the Korea Energy Economics Institute, said that the international price of crude “will likely continue to rise in the future, and the development of unconventional oils will expand.”

Unconventional oils are more complicated to mine because they are deposited horizontally and need to be drilled vertically first through inserted pipes and then horizontally, unlike regular oil, which only requires the first step.

After the pipes are put in place, heat and pressure are applied that causes fractures in the shale, through which the oil or gas can be extracted. This method is known as fracking.

For oil sands, hot water and caustic soda are added to the sand, and the resulting mixture is piped to the extraction plant, with the oil skimmed off the top. 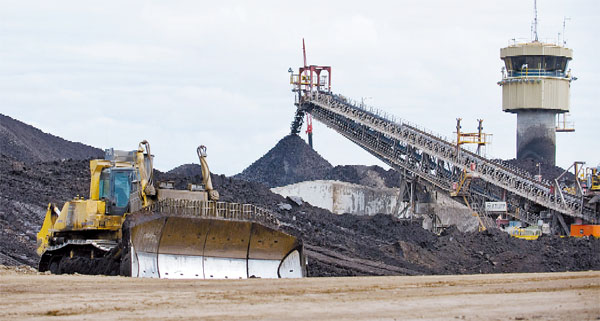 Oil sands are excavated in Fort McMurray, Alberta, Canada. The state-run Korea National Oil Corp. is also building an oil sands production facility in the province as part of a project called BlackGold, through which it intends to produce 10,000 barrels of heavy oil a day starting from next year. [JoongAng Ilbo]

Traditionally, Middle Eastern countries like Saudi Arabia, Iran and the United Arab Emirates held the biggest oil reserves, but the pecking order has been reconfigured by the greater prominence placed on unconventional oils, which were recently included among nations’ reserves for the first time. Now Canada ranks second globally and Venezuela third behind Saudi Arabia.

Canada pumps out more than 1.5 million barrels of oil a day and now stands as the world’s sixth-biggest oil producer. It is expected to leapfrog Iran and China to fourth place as it mines more oil from its known oil sands.

“With the international price of crude oil going up, more undeveloped resources are sought and oil reserves tend to grow,” Kim of the KNOC said.

In fact, industry observers say that this new trend will catapult the Americas ahead of the Middle East to stand at the forefront of the world’s energy resources before long.

This changing dynamic can even be seen on an intra-national level, with Pittsburgh emerging as the new rising star in the U.S. due to its high levels of alternative oils. Traditionally, Texas has been at the center of the U.S. oil industry.

Meanwhile, Americans are now leaning on shale gas more than ever before, a process that has been building up for the last 10 years, and interest is increasingly brewing in this energy source in various regions around the world.

Some analysts expect shale gas to account for 50 percent of all natural gas production in North America by 2020.

Even major oil companies are joining the fray. Exxon Mobil, the world’s No. 1 player, has invested 20 trillion won ($17.5 billion) to acquire XTO Energy, a shale gas developer. Total SA, the biggest oil company in France, acquired the Utica shale formation in Ohio for $2.3 billion from Chesapeake Energy and EnerVest. 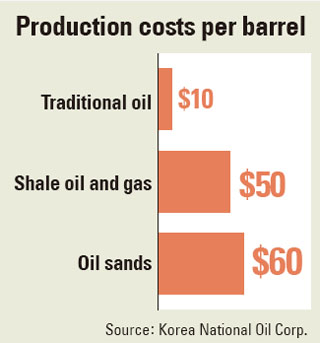 However, there are concerns that the race to obtain unconventional oils is already overheating, as the Financial Times recently reported that Asian countries have invested heavily in this sector despite opposition from environmentalists. Overproduction is also likely to lead to a drop in price.

Environmentalists take issue with fracking as it is believed to contaminate millions of gallons of water. France has banned the development of shale oil and gas for this reason and Steven Chu, the U.S. secretary of energy, said regulations are needed to curtail pollution if this is to be permitted to continue.

Shale gas: This is a form of natural gas produced from shale, a fine-grained sedimentary rock that contains high levels of organic materials. It yields an oily substance that can be distilled by heating the shale in an oxygen-free environment.

Also known as tar sands, these serve as deposits of petroleum. The sands contain naturally occurring mixtures of sand, clay, water and a dense and extremely viscous form of petroleum.