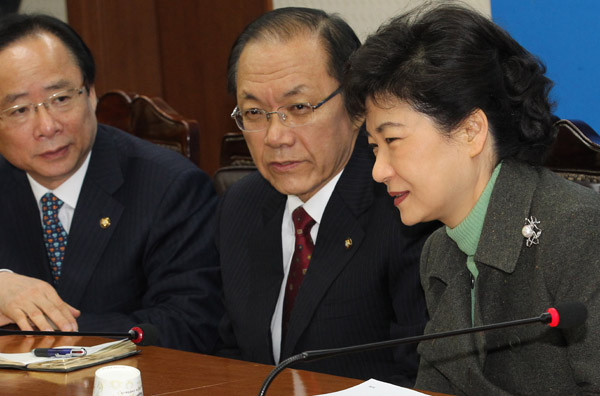 The Grand National Party will give up its name if the party’s lawmakers want to make the change, interim GNP leader Park Geun-hye said. The announcement is a move to silence reformists’ demands to break up the ruling party and rebuild it to halt its declining popularity.

“For a fresh start, we can change the party’s name,” Park said in her closing statement of the GNP lawmakers’ caucus on Tuesday. “We can change it if you want.”

It was the first time that Park openly spoke about her willingness to give up the GNP’s name. “I am making the preparation, with the presumption that you want the party’s name to be changed,” Park said.

However, she made clear her rejection of the reformists’ demand to dismantle the party and create a new one.

“We’ve already ended our discussion about it,” she said. “I bring it up again just because we are facing the vote-buying scandal and other difficulties will mean that we will talk about breaking up the party and creating a new one whenever we face a crisis.”

“We must endure this,” Park said. “What I feel is important in politics is that a politician must be a person of principle.”

The idea for the change appears to have come from the Democratic Liberal Party changing its name to the New Korea Party in 1996. At the time, the DLP changed its name before the legislative elections to maximize the political impact of the change. The New Korea Party later became the Grand National Party ahead of the 1997 presidential election.

Park also tried to please the reformists’ demand to relaunch the party by showing willingness to give up the GNP name. Although she still opposes breaking up the party, Park seeks to redefine the GNP’s image by changing its name, platform, policies and organizational structure.

At the caucus, the GNP lawmakers also agreed to accept the emergency leadership’s plan to rate the performance and popularity of the incumbent lawmakers and cull the bottom 25 percent from the nomination process. Some modifications are still to be made to the plan, the lawmakers agreed, because using the unilateral standard would be unfair for the lawmakers representing the capital region in comparison to the Gyeongsang region.

“Although each and every one of us will have some complaints about the nomination reform plan, there is no hope for us if we have mudslinging fights with each other,” Park said.

She, however, could not stop some lawmakers from challenging her leadership.

Representative Chung Doo-un, a reformist, disagreed with Park’s idea to change the GNP’s name. “The people do not care whether we rule out 25 percent, 50 percent or 100 percent,” Chung said. “What they want is for the GNP to shut down.”

Representative Chung Mong-joon, former chairman of the party, also complained that the nomination reform will not necessarily help the GNP.

“It will be unfortunate if the idea will discourage our lawmakers who are working so hard to overcome the crises in their districts,” he said.