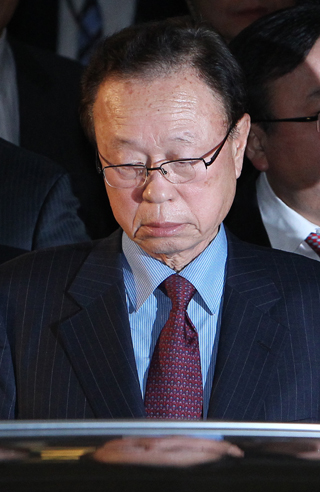 National Assembly Speaker Park Hee-tae after a press conference on the votebuying scandal at Incheon International Airport. By Kim Do-hoon

National Assembly Speaker Park Hee-tae yesterday denied any knowledge of lawmakers being given envelopes of cash to vote for him as Grand National Party chairman in 2008, but didn’t comment about snowballing pressure for him to step down as speaker.

Park returned to Seoul yesterday morning from an overseas trip and apologized to the nation for having caused trouble.

“It’s been almost four years since the alleged money-for-vote attempt took place,” Park said at a press conference at Incheon International Airport upon his arrival. “So my memory has faded. At the time, there was a cluster of five important elections only a few months apart, and there is not much I can say right now.”

Park said he will wait for the prosecution’s investigation to be complete and take responsibility accordingly.

“To express my apology, I will not seek re-election in April,” Park said.

In mid-December and again earlier this month, GNP lawmaker Koh Seung-duk disclosed that Park’s office gave him an unsolicited 3 million won ($2,600) in cash in a manila envelope in an obvious attempt to buy his vote for Park as chairman of the party. Koh’s secretary saw many more manila envelopes carried by a messenger. Koh returned the money to Park’s office.

Park left the country on Jan. 8 for a prescheduled business trip.

Both ruling and opposition parties continued to pressure Park to resign from the National Assembly speaker post. The GNP, Park’s former party, criticized his handling of the scandal as being inadequate. Park, a six-term lawmaker who served as the GNP’s chairman in 2003 and from 2008 to 2009, gave up his party affiliation in June 2010 to become the speaker.

At a party leadership meeting, the GNP’s interim leader, Park Geun-hye, also tried to do some damage control.

“Those involved must cooperate with the investigation to lay bare the truth as soon as possible,” she was quoted as saying by GNP spokesman Hwang Young-cheul. “It is undesirable for the probe to be prolonged.”

Oh said Park was insulting the public by saying his memory has faded. “What’s been revealed so far is enough for Park to have to take responsibility,” he said.

On Monday, the prosecution arrested Ahn Byung-yong, head of the GNP’s chapter in Eunpyeong District in western Seoul, and it is expanding its probe to other key aides of Park. During the 2008 GNP chairmanship election, Ahn worked for Park’s campaign.

It remains to be seen if Park will be able to preside over the National Assembly session scheduled for today. Opposition parties have said they’ll boycott if he does.

The GNP said yesterday that it wants to hold the session today to approve a plan to appoint an independent counsel to investigate the cyberattack on the National Election Commission on the day of the October Seoul mayoral by-election. The prosecution has concluded that a GNP lawmaker’s chauffeur and an aide to Park Hee-tae had colluded to launch the cyberattack with the intention to confuse people planning to vote for the liberal candidate Park Won-soon, who won the by-election. The ruling and opposition parties have agreed to appoint an independent counsel to investigate.

According to GNP spokesman Hwang, the deputy speaker of the National Assembly, Chung Ui-hwa, will be asked to preside over the session.

“Even if the DUP boycotts the session, we will go ahead and approve the independent council bill,” Hwang said. “If we appoint the independent counsel, the officials of the GNP and the Blue House suspected to be involved in the cyberattack will naturally be investigated. We must not derail this.”

Hwang also said the GNP has given full authority to its floor leader to “wisely handle” the resolution urging Park to resign.