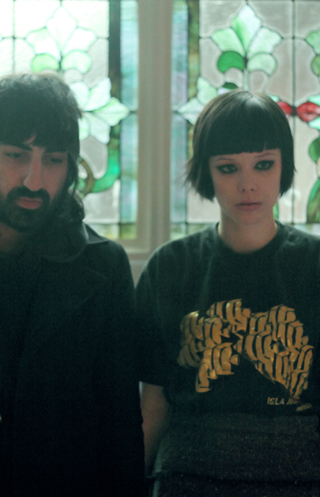 The massive Kintex convention center lies like a sleeping giant near the northwestern terminus of the orange line in Ilsan, Gyeonggi. Last Saturday, its cavernous halls played host to the 2012 Seoul Electronic Music Festival, which featured the sounds of Idiotape, Crystal Castles, Justice, and Above and Beyond, to name a few.

The festival kicked off at 3 p.m., ran through the evening and drew to a close the next morning.

When I arrived, the Kang Saneh Band was playing, a group whose island-funk syncopations and chatty frontman were a lively choice for the bleak January dusk. But Kang’s cajoling was to no avail. The modest crowd, draped in black, sequins and pleather, wasn’t giving back. It’s not that Kang wasn’t good - he was great; his songs are popular enough to get poached by MBC’s “Survival: I Am a Singer” - but he was playing to the wrong audience. The synthetic pop-rock pulsing of Telepathy, the band after, drew a hotter response.

Korean trio Idiotape was the first headliner to spike the crowd’s adrenaline with aggressive punk riffs, eight-bit barrages and driving disco downbeats. The crowd was jerking in unison (the youth of Korea do not seem to “dance”), as I stood in awe. For ears bored with K-pop hooks - cloying, dim-witted and doe-eyed; oversexed or twee - I was stunned to hear Korean music that was so indifferent to whether I liked it or not. And Idiotape’s performance was at least twice as muscular as what I’d heard on the album. Its participation in the North American Seoulsonic tour last March begs the question: Are they pioneers of a world-ready K-rock? I hope so.

Crystal Castles slinked on before a crammed and shoving crowd, their appearance presaged by a robofied whisper laced with venom. Toronto’s premier lo-fi electro duo is notorious for its chaotic stage shows, and the black-banged lead Alice Glass did not disappoint as she flounced forward, drew a swig of Red Label and spewed it at her audience. Roaring “Deathray,” the only lyric of the band’s blast-beating rampage, “Doe Deer,” Alice made the first of three stage dives as the bearded, cowled silhouette of mixmaster Ethan Kath lurched over his MicroKORG like a cyber-enhanced Rasputin.

Justice’s set design featured its logo, a glowing 1.5-meter (5-foot) neon crucifix affixed to their sound table rig. The French house, electro-rock duo is known for enthusiastically blending synth-pop with heavy metal and disco influences. Performing shortly after midnight and ensconced behind a castle wall of speakers, its triumphant and heaven-kissing anthems were greeted by the festival’s biggest and wildest audience.

Billed by the program as “Group Therapy,” British trance-master trio Above and Beyond stepped on stage at 1:40 a.m. and unspooled a hypnotic one-and-a-half-hour set for all devotees or insomniacs willing to stick it out until the metro opened at 5 a.m. in lieu of the roughly 30,000 won ($26) cab ride back to Seoul.