Unleashing the Year of the Dragon in Seoul

Unleashing the Year of the Dragon in Seoul 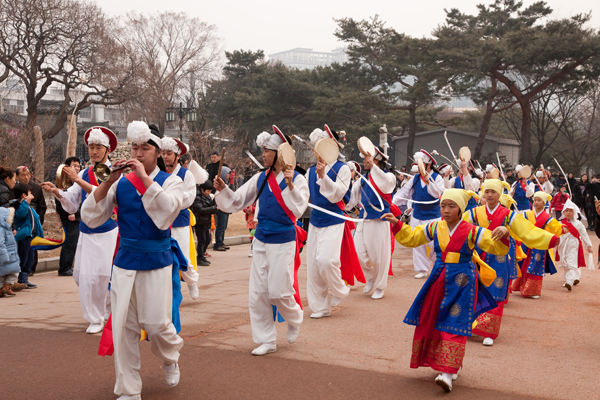 The National Folk Museum of Korea provides a rich lineup of traditional performances, activities and hands-on programs during the Lunar New Year holiday. Provided by the museum

The Lunar New Year holidays are just around the corner, meaning the Seoul metropolis will turn into a ghost town for a couple of days with the mass emigration of people visiting their hometowns.

The holiday weekend offers a rare opportunity to walk down the tranquil streets of a major city, but the downside is that seemingly every spot - restaurants, cafes, pubs and even public bath houses - are shut down.

But, despite the city’s appearance, there are popular destinations in Seoul over the Lunar New Year. For those traveling in Seoul or the loners with nowhere to go, here is a list of places to help catch up with the holiday sentiment:

From dragons to shamanism

The National Folk Museum of Korea is offering a rich lineup of activities and hands-on experiences over the weekend. To mark the Year of the Dragon, the folk museum, located in Gyeongbok Palace, central Seoul, is holding the “Special Exhibition: The Year of the Dragon,” which displays some 80 art pieces that are dragon-themed, including flags, drawings, seals and robes of royal families.

“We hold this exhibition every year based on the Chinese zodiac,” said Kim Yoon-jeong, who is in charge of the exhibition. 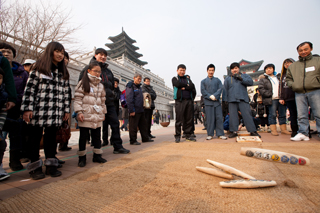 The dragon, a legendary beast that is comprised of a combination of many animals including a snake, carp and tiger, is considered one of the most holy creatures - it is customary for people to buy lottery tickets after they have dreams about dragons.

Being one of the more popular zodiac signs, the dragon is expected to attract a large crowd at the museum this Lunar New Year. The exhibition runs through Feb. 27.

A rare chance to watch gut, or a traditional Korean shamanism ceremony performed by mudang (Korean shamans), will be staged on Monday at the main hall of the folk museum.

The gut starts at 12 p.m. and will be staged for the sake of national prosperity and the welfare of nationals.

If you want to know your luck for the entire New Year, you can read your fortunes by throwing sticks of yut, or traditional board-game sticks, at the forecourt of the main building from Sunday to Tuesday, 11 a.m. to 4 p.m.

There will also be a professional fortune teller who will reveal the future based on tojeongbigyeol, the traditional Korean fortune-telling book. They are both free of charge. 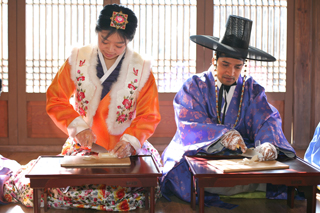 Marking the 20th anniversary of diplomatic relations with China this year, free events are being offered during which participants can learn how the Chinese celebrate the Lunar New Year.

Traditional Chinese snack bingtanghulu, or crispy sugar-coated fruits, will be given to 500 people on a first-come-first-serve basis from Sunday to Tuesday. It starts at 11 a.m. Reading one’s fortune the Chinese way is possible at the forecourt of the folk museum main building as well.

Of the many hands-on experiences available, classes on sculpting the 12 different animals of the Chinese zodiac using clay will be available between Sunday and Tuesday, which cost 3,000 won ($2.60) per participant.

Another event involves making accessories using traditional knots. These classes cost between 5,000 won and 7,000 won, depending on what you make.


Traditional tunes for the New Year

The Seoul Namsan Traditional Theater is offering a New Year concert entitled “New Year Arirang” on Monday and Tuesday at 3 p.m. Even if you don’t know much about minyo, or folk songs, you don’t need to worry - traditional singer Kim Yong-wu combines minyo with various genres of music including classical, jazz and a cappella. Every seat is 1,000 won and a team of samulnori (traditional Korean percussionists) will take to the stage as well.

A special hands-on class for non-Koreans, entitled “Mi Su Da,” will be offered from today to Tuesday between 4 p.m. and 6 p.m. “Mi Su Da,” a combination of three Chinese characters, stands for “beauty, excellence and tea.”

Enrollment in the class costs 50,000 won per person, but a 30 percent discount is given when a group of 10 people registers together. Interpreters of various languages will be present at the two-hour class. For more information, visit http://sngad.sejongpac.or.kr/eng or call (02) 2261-0512.

An upscale traditional concert is also available at Samcheonggak - a venue once used as a yojeong, or an upscale gentleman’s club, back in the 1970s.


For the adrenaline seekers 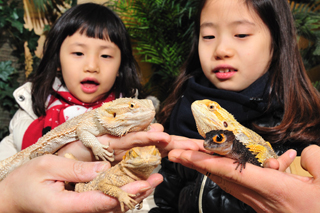 Korea’s biggest amusement park, Everland, will offer a 60 percent discount on admission tickets to those who were born in the Year of the Dragon. The park is also holding an exhibit displaying animals of the 12 Chinese zodiac signs. Provided by Everland

If you decide to spend a day at Everland, a special exhibition is worth seeing: About 50 animals which belong to the 12 Chinese zodiac signs, including rabbits, horses and tigers will be on display at the exhibition. Since the dragon is an imaginary creature, painted dragons, bearded dragons and green lizards will take its place. For more information, visit www.everland.com or call (031) 320-5000.

Lotte World, the second-largest indoor amusement park located in Jamsil-dong, eastern Seoul, is also offering a 30 percent discount to people who were born in the Year of Dragon. For more information, visit www.lotteworld.com or call (02) 411-2000.

Free entrance for those in hanbok

It is indeed a hassle to wear hanbok and walk around downtown - but if you could, there are many places where you can enter free of charge.

Marking the sixth anniversary of video artist Paik Nam-june’s death, Nam June Paik Art Center, located in Yongin, Gyeonggi said a group of four people with at least one in hanbok could gain free entrance to the art center on Monday.

Hanbok-clad visitors are also able to get access to Gyeongbok Palace, Changdoek Palace, Changgyeong Palace and Deoksu Palace for free on Sunday and Tuesday.