Chinese to flash plastic in Korea

Chinese to flash plastic in Korea 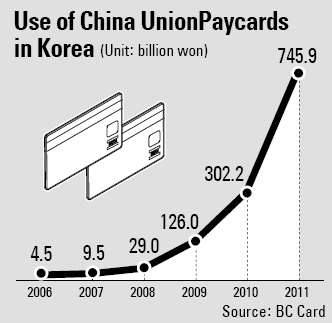 With the Lunar New Year holidays around the corner, Korea’s tourist hot spots are bracing for an estimated 45,000 Chinese visitors coming to sightsee and shop during their own Spring Festival, which runs from Jan. 22 to 28 this year.

And with more and more Chinese using plastic instead of cash, the country’s dominant card, China UnionPay, is expected to be flashed frequently as Chinese tourists spend some 100 billion won ($88 million) in Korea during little more than a week, according to the Korea Tourism Organization.

Created in 2002 by China’s central bank, China UnionPay is the sole national electronic payment network in the world’s most populous nation due to high entry barriers to competitors by the government. 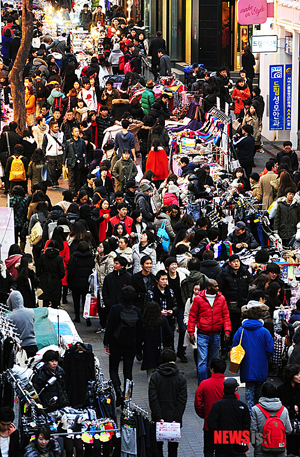 It may not be household name in Korea, but China UnionPay has already overtaken Visa and MasterCard. Cards with red-blue-and-green UnionPay logo now account for “three in every 10 cards worldwide,” according to the U.K.-based business research group Retail Banking Research in August.

According to McKinsey consultants, credit card accounts in China grew from 11 million in 2004 to an estimated 124 million in 2008. In a survey conducted in April 2009, 42 percent of urban consumers in China said they had a credit card.

In Korea, payments by UnionPay cards have seen an exponential increase, from 4.5 billion won in 2006 to 745.8 billion won in 2011, according to domestic card payment processor BC Card. This year, the amount of payments is expected to exceed 1 trillion won. UnionPay’s strategic alliance with BC Card beginning in 2005 allows payment at some 2.2 million locations that accept BC cards nationwide.

However, Chinese tourists traveling off the beaten path may encounter difficulties finding shops that accept their cards.

“Roughly 60 percent of UnionPay charges made in Korea were by debit cards, which need machines with PIN number pads in order to process the payment,” said a BC Card spokesperson.

Because most domestic cards are so-called “check cards,” or debit cards requiring a signature instead of a PIN number for payment, BC Card said just 300,000 locations have the hardware necessary to process UnionPay debit cards.

Since December, encouraging debit card usage has been one of financial regulators’ key priorities in the domestic card sector, but analysts say the difficulty of placing machinery that can process PIN numbers - which have to be distributed by banks - is a hurdle.