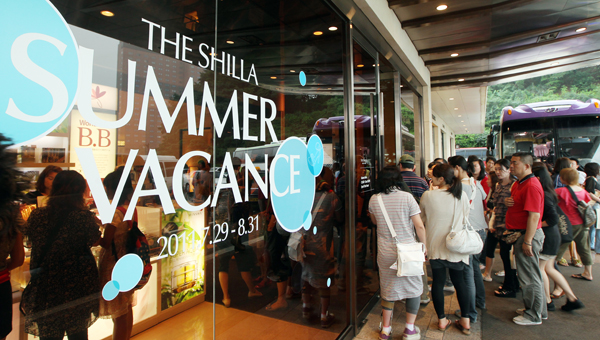 Korea’s top two duty-free empires, Lotte and Shilla, are competing to win the contract to sell at the Los Angeles International Airport, pitting the eldest daughters of two leading conglomerate families against each other.

Korea’s No. 1 duty-free shop, Lotte, and No. 2 Shilla confirmed they will bid for the right to run the 3,716 square meters of duty-free shopping at Los Angeles International Airport, also known as LAX. The business is currently run by DFS Group, the world’s No.1 duty-free retailer.

The winning bidder will secure the right to operate all duty-free shops at LAX starting Jan. 2013 for 10 years with an option to extend the contract for three years.

Last year alone, around 8.13 million passengers used LAX and its duty-free shops chalked up $117.54 million in sales, up 20 percent from 2010. The airport is the leading arrival point for Asian air traffic into the United States.

In December, Shilla sent a delegation to a concession day in preparation for the LAX duty-free tender. According to Moodie Report, a London-based duty-free retail magazine, DFS Group, Aer Rianta International, Dufry Group, Duty Free Americas, the Nuance Group and Travel Retail USA were also present at the meeting.

Only retailers that attended the concession day have the right to bid. LAX will accept applications for bids until February and announce the new operator in June.

Lee Boo-jin, president of the Hotel Shila, who is the eldest daughter of Samsung Electronics Chairman Lee Kun-hee, said in her inauguration speech in 2010 that “Shilla will become a global top-tier global service enterprise.”

“The Louis Vuitton airport outlet was a starting point for Shilla’s global expansion,” said Lee Seok-chun, Shilla’s public relations official. “If Shilla becomes the winning bidder of LAX duty-free, it will rise to be the world’s 5th largest duty-free retailer, from its current 10th place.”

According to Moodie Report, Lotte is the fifth largest duty-free retailer and Shilla is tenth based on 2010 sales.


The two Korean duty-free giants are already competing to win the right to run duty-free shopping at Hong Kong’s Chek Lap Kok Airport. The decision will be announced at the end of this month.

While Lotte independently submitted a bid for the right to run all three categories of duty-free retailing - liquor and tobacco, perfumes and cosmetics, and general merchandise - Shilla partnered with Sky Connection in a bid to win rights for general merchandise, which include sales of luxury shoes, clothing and bags.

After Shilla confirmed to local media Tuesday that it was preparing to bid for the LAX contract, Lotte confirmed to media later that evening that it also was throwing its hat in the ring.

“We’re currently looking into forming a consortium with a foreign duty-free retailer that was present at the December meeting,” said Kim Dong-hoon, a public relations official at Lotte.

According to analysts at securities firms, Lotte’s sales for 2011 were estimated at 2.7 trillion won and Shilla’s 1.5 trillion won.

In terms of global expansion, Lotte already has the lead as it is scheduled to open its first overseas duty-free shop at Soekarno-Hatta International Airport in Jakarta by early February.

Although Shilla doesn’t have an overseas duty-free shop yet, it opened a cosmetics shop, Sweet May, that sells 20 low- and mid-priced Korean cosmetic brands at the Venetian, a luxury hotel in Macau. Macau is a duty-free area.