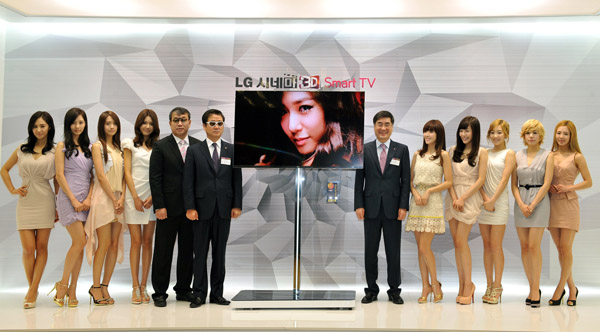 LG Electronics yesterday unveiled new three-dimensional TVs a month ahead of its original plan, an aggressive move to get into the market before its rivals.

“We will focus on emerging markets, the Middle East and Commonwealth of Independent State regions because the Europe market isn’t doing well,” Kwon said at a press conference yesterday at LG Electronics’ Seocho R&D Center in southern Seoul. “We will secure the No. 1 position in the world’s 3-D TV market this year.”

According to DisplaySearch, a market researcher, the 3-D TV market worldwide is expected to grow by an average of 33 percent every year from this year through 2015.

It estimated the share of 3-D TV sales in the entire TV market will grow to 37 percent in 2015 from this year’s 18 percent.

LG’s rush to release new TVs ahead of its rivals is part of LG Electronics CEO Koo Bon-joon’s management philosophy.

When he was appointed CEO from a vice chairman position in 2010, Koo emphasized his employees must be cold-blooded combatants, according to insiders.

“LG’s strategy of picking a fight with competitors in the 3-D TV market is different from LG’s tradition,” an LG official said. “An aggressive culture is throughout the entire company now.”

In regard to low-price TVs that are selling at local retail giants including E-Mart, Homeplus and Lotte Mart, Kwon acknowledged there was a need to prepare for low-priced TVs gaining popularity due to the economic downturn.

LG argues it has a secure No. 1 position in 3-D TV sales in the domestic market. The company said competitors including Toshiba, Panasonic and Sony are adopting its film-type patterned retarder technology, shifting from the shutter glass technology that arch-rival Samsung Electronics uses.