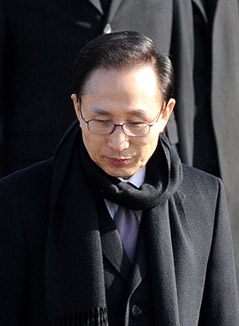 Kim Chong-in, a member of the GNP’s emergency leadership, brought up the sensitive issue on Wednesday. “We cannot forcibly kick out the president,” Kim said. “But he must decide what he should do to help the GNP win the presidency.”

Kim did not hesitate to attack Lee directly. “If the highest leader doesn’t have political sense enough to make the decision, the problem is seriously complicated,” he said. Kim also said the GNP must differentiate itself from the Lee administration, or else it won’t be able to attract voters. “The emergency council cannot tell the Blue House what to do,” he said. “We just have to go around it.”

The remarks were seen as an overt demand for Lee to leave the GNP, but the GNP spokesman Hwang Young-cheul tried to downplay the significance. “It’s not the official position of the emergency council,” he said.

The Blue House tried to hide its displeasure. “We will not directly counter it,” said Park Jeong-ha, a spokesman of the Blue House. “It’s our understanding that the position is not the party’s official stance.”

Pressure on Lee to leave the GNP, however, grew further yesterday. “I think it is right for the president to move out if it helps the GNP to be reborn,” said Representative Kwon Young-jin in an interview with the PBC radio.

“Throughout the next year, the opposition will continue to attack the president as long as he holds on to party affiliation. The state affairs will stray, and the people will eventually suffer. For the sake of the people, the president must stand on neutral ground.”

Kim continued to defend his argument. “I spoke based on a common sense,” he told the CBS radio yesterday, stressing he had no political motive behind it.

Lee loyalists in the GNP reacted angrily. “What a sight it is,” Representative Lee Jae-oh wrote on Twitter. “This is not the first time we are seeing this situation, so we will know better as time goes by.”

Representative Chang Je-won said it is a dirty trick if the GNP wants to see a gain in the legislative election through Lee’s departure. He also said he wondered if Park Geun-hye, head of the emergency council and long-time rival of Lee, was behind the pressure.

Park loyalists worry that the internal rupture would further damage the sinking ruling party. “It’s wrong to talk about Lee’s departure,” said Representative Yoo Seong-min. “There is no reason for Park and the emergency council to fuel the party’s problems.”

“A failed president will still be our responsibility,” said Representative Lee Jong-heuk. “It is wrong to tell the weak president at the end of his term to leave the party.”

It is tradition in modern Korean politics for a president to give up his party affiliation at the end of his term. Presidents Roh Moo-hyun, Kim Dae-jung, Kim Young-sam and Roh Tae-woo all did so to free their parties from the burdens of their political failures before the next presidential election.