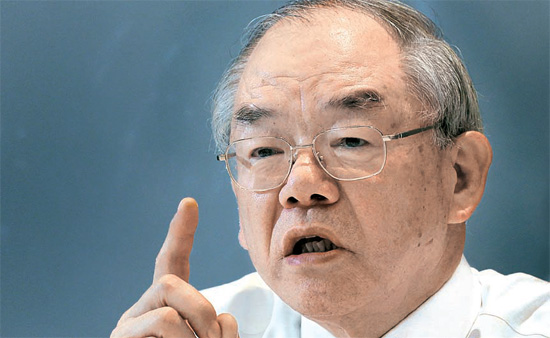 The President of the Korea Advanced Institute of Science and Technology, Suh Nam-pyo, 76, has been under fire after the school was hit with the suicides of four of its students and one professor last year.

He was criticized for being too tough on his students. Now his days may be limited as the school’s faculty association and the chairman of the board of directors have stepped up to pressure the president to resign possibly as early as next month.

Suh confirmed that the chairman of the board of directors at Kaist and former minister of science and technology, Oh Myung, 72, suggested he resign last month.

In an interview with the JoongAng Ilbo on Tuesday, Suh stated, “Chairman Oh Myung is exceeding his authority,” by urging the resignation of the president. Furthermore, “Oh is leading the selection of the new members to the board of directors, excluding the president.”

The Kaist faculty association took a poll last week to pass a measure to request the formal resignation of the president and 75.5 percent (289) voted for it out of the 383 who participated in the poll out of a total of 536 members.

Including Oh and Suh, there are 16 members in total on the board and the vote of new members may be enough to pass the request to formally dismiss the Kaist president.

“I have no intentions of voluntarily resigning,” Suh said. “Not being able to withstand the pressure and giving up the seat will not be good for the successor.”

A spokesman of the faculty association on Jan. 12 said, “In regards to President Suh’s tendencies toward being dishonest, irresponsible and in pursuit of his own self-interest, we determined that he could not lead Kaist as its head any longer” and that in the case Suh refuses to voluntarily resign, they will press the board of directors, the top decision-making group of the school, to dismiss him.

The motion drafted by the faculty association to request Suh’s dismissal further asserted that President Suh “had been provided plenty of conditions and opportunities to communicate with the members and improve the situation” and that “through abnormal management of funds has incurred an enormous financial loss [for the school] and to pursue his own interests abused the nation and the school’s valuable revenue.”

Suh’s fate will likely be determined at the next meeting of the board of directors on Feb. 7.

Investigation into the students who committed suicide determined that they may have taken their lives due to intense pressure from the new policies imposed by Suh at Kaist which required students who fell below a 3.0 grade-point average to pay toward their tuition. They farther below the mark they fell, the more they had to pay.

Suh took office in 2006 and is the first Kaist president to serve two consecutive terms, being re-elected in July 2010. He instituted ambitious plans in 2007 to raise standards at the university, such as making tenure rules stricter and ordering professors to give lectures in English only.

But his most controversial move was making Kaist’s full scholarships for its students dependent upon their grades so that students with a grade point average of below 3.0 must cover part of their tuition. Before Suh’s presidency, all Kaist students received full scholarships, regardless of grades.