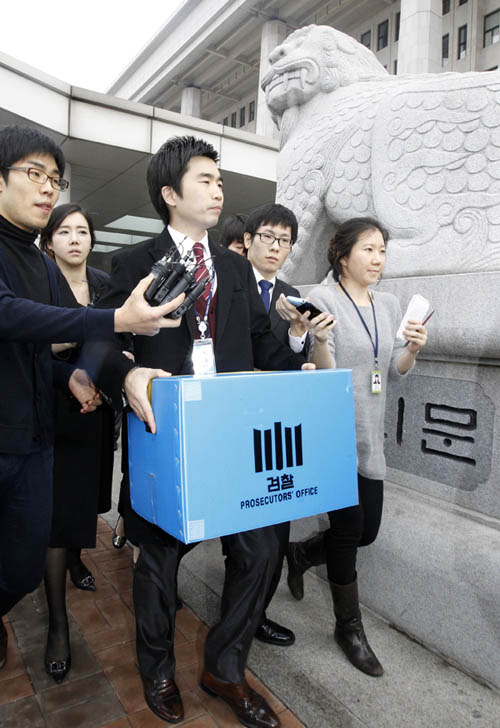 An investigator takes out a box containing documents from the speaker’s secretariat office after a raid yesterday. [NEWSIS]

Prosecutors yesterday raided the offices of the National Assembly speaker’s secretariat as a part of the investigation into the Grand National Party’s money-for-votes scandal.

The raid took place yesterday morning, only a day after National Assembly Speaker Park Hee-tae returned from his overseas trip. Park, a former chairman of the GNP, was accused of attempting to buy votes in the 2008 chairmanship election of the ruling party.

At a press conference upon his arrival on Wednesday, Park denied any knowledge of the attempts, saying that he could not remember what had happened four years ago.

Jo, 51, has worked for Park for more than 20 years. He was in charge of Park campaign’s fund-raising and organization in 2008 GNP leadership election to make him chairman.

According to the National Assembly officials, Jo asked to take leave on Jan. 11 and has not appeared at the office since then. The prosecutors have already barred him from leaving the country.

Lee, 50, was in charge of the public affairs of the Park campaign in 2008. The female assistant, 38, was responsible for Park’s campaign’s accounting.

It was the second time that Park’s secretariat was raided by the prosecution.

On Dec. 15, prosecutors seized documents and computers from the offices to investigate an allegation that a Park aide had ordered a cyberattack on the National Election Commission with intention to harm the liberal independent candidate’s chance in the October Seoul mayoral by-election.

According to the sources at the prosecution, prosecutors respected Park’s status as the National Assembly speaker during their first raid. Although they had a warrant, they asked the secretariat to hand over the data. And yet, yesterday’s raid took place without notification.

“It’s the first time that they just came without any prior notice,” said an official of the National Assembly.

“Because Park was out of the country for his prearranged schedule, we thought it was discourteous to raid his aides’ offices during his absence,” said Jeong Jeom-sik, a senior prosecutor of the Seoul Central District Prosecutors’ Office in charge of the case. “So we delayed the timing to after Park’s return.”

The investigators who participated in the prosecution remained tight-lipped about the ongoing probe as journalists asked them if they intended to summon Park and if they obtained meaningful evidence through the raids. The raid lasted about three and a half hours.