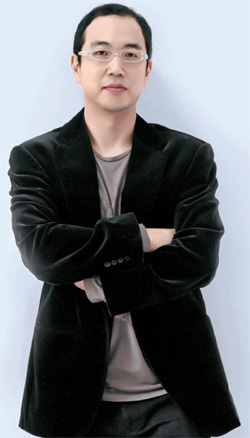 James Song, the founder and CEO of Gamevil, Korea’s No. 1 publisher of mobile games, likes to adhere to the lifestyle of a regular office worker.

He commutes by subway, has dinner at the company cafeteria and works out at the neighborhood pool.

But the 36-year-old is, in fact, one of the 40 richest men under the age of 45 selected by Chaebul.com, a Web site focusing on Korean corporations and businessmen.

His stake in Gamevil is estimated to be valued at 128.6 billion won ($111.89 million) as of last year. Song was also named one of Asia’s 25 Best Young Entrepreneurs by Business Week in 2007.

In spite of that, Song’s frugal lifestyle is well known among his employees - to the point where he is nicknamed a “puritan” by his friends and acquaintances.

He is often seen running from the subway station to the office building early in the morning, Song books economy-class tickets rather than first-class seats when going on overseas trips, Samgyeopsal (pork belly) and soju are known to make up his favorite meal and swimming, table tennis and squash are often chosen over golf, the sport of choice among CEOs.

His humble lifestyle is connected to Song’s early years as an entrepreneur who had little capital but big dreams.

The Gamevil CEO graduated from the electric engineering department of Seoul National University, where he founded the university’s first club for IT ventures in 1996.

“In 2000, 10 friends and I set up Gamevil. We didn’t even have an office then, so we worked at the computer lab of our school,” he reminisced.

But Song said the main reason why he likes to stick to the lifestyle of an “average Joe” is that he believes as a game publisher, “you should get the same experiences as game users in order to read their minds.”

In that sense, Song is an avid fan of subways, saying that there is no better place to understand market trends and consumer desires. “The subway is the place where people play games the most,” he said.

And it is these real life experiences that inspire new games, such as 2003’s “Nom,” Song explained.

People can play the game by turning their mobile phones 90 and 180 degrees and watch the animation react accordingly.

After trying to read the minds of consumers, Song dives into the psyche of Gamevil’s rivals. He plays almost all of the mobile games available in the Korean market.

Despite his fortune in the industry, Song said he finds it regrettable how the time people spend reading books has reduced significantly due to smartphone usage.

“The content you see on smartphones is rather volatile, so you tend to forget about what you saw after a certain while,” he said.

“But what you see in books tends to last longer and more vividly in your memories.”