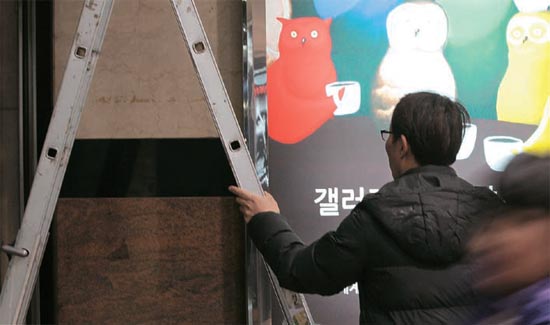 A 53-year-old homeless man surnamed Song, who has been dubbed a “Savings King” after working to pay off eight years of accumulated debt, started off as an owner of a manufacturing company.

But tragedy struck in 2004 when the company he had inherited from his father in 1996 went bankrupt due to fierce competition with Chinese manufacturers.

At that time, Song recalled, he had an apartment under his wife’s name and tried to recover his failure through stock investments. However, these methods also failed, and soon he had lost everything.

Tormented by the guilt of not being able to protect his family, he threw himself into the Han River in December 2008.

When he awoke, he was in the hospital emergency room. He survived because someone had found him and dialed 119.

Song started working in public services the next year, but creditors began to follow him again. There was no choice, he said, but for him to divorce his wife for the sake of the family.

Song wandered the streets for a while until he stumbled upon the Salvation Army’s center for the homeless in Seodaemun District, central Seoul, and decided to make a fresh start. He took any jobs he could find.

Since last March, he began paying off his debt monthly - 90,000 won ($78.40) at a time. He saved all of his earnings from working at a soup kitchen except for what he paid monthly for his debt workout plan.

Song has a dream: living with his family in a small rented apartment.

Another homeless man surnamed Lee, 45, formerly a popular English teacher, also has a similar story. He failed with stock investments, became homeless, divorced his wife in 2005 and attempted suicide in 2010.

What made him change was the encouragement from an adviser he met at a homeless center.

“You have already hit the bottom. It only remains for you rise up,” the adviser said.

With help from the adviser, he began to work at construction sites.

Now, Lee has been saving 95 percent of his earnings, around 1.5 million won, and has four bank accounts with 19.4 million won saved.

Lee has shed his “delinquent credit” label and also paid his health insurance fees recently. Lee has a dream of living with his daughter five years later and with savings of 100 million won.

Both Song and Lee are one of the 70 people dubbed “2011 Savings Kings,” a title granted to the homeless who live in shelters managed by the Seoul Metropolitan Government.

These 70 “kings” earned an average of 6.56 million won and saved an average of 3.75 million won from April to November of 2010. There are many similar stories, such as a Filipino woman who wandered the streets because of family violence and a man surnamed Jung, 54, whose accessories factory went bankrupt.

Now, he has been paying 230,000 won every month for eight years by repairing homes. Jung too is eager to live with his family after paying all his debt.