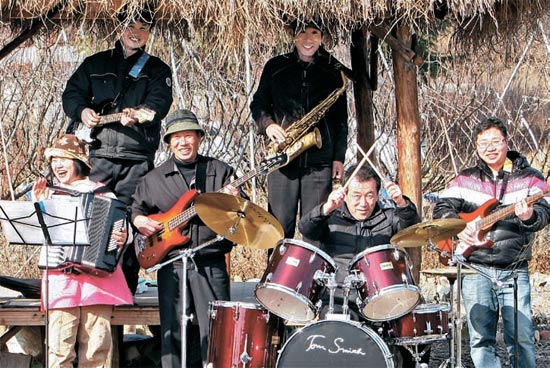 Enthusiastic applause burst out from some 300 joyous audience members, including both residents of the town and visitors from afar, after the Hwa-Baek Band - a group comprised of middle-aged musicians - wrapped up their performance at the little-known “2012 New Year Festival.”

The show, in the small village of Bibijung in Wanju County, North Jeolla, featured songs like “Camellia Lady” and other popular trot tunes - Korea’s oldest form of pop music.

“Entertainment in farming villages in the winter, which includes sitting down and playing Go-Stop [a popular Korean card game] or watching television all day long, should change,” said Kim Seung-tae, the youngest member of the band who became a farmer after quitting his job in Jeonju, North Jeolla, two years ago.

“I believe music can become the new paradigm of entertainment. Playing an instrument and singing could make our community members enjoy working and harmonizing together.”

The band was formed in July 2011 as part of Wanju County’s cultural project to provide a boost to the area. The average age of farming residents in rural areas is usually over 65.

That is also the case in Bibijung Village, where 70 percent of residents are older than 65.

“Wanju suggested that our village create cultural activities, and our residents proposed a band because we like music,” said Park, a village head. “Because we were farmers, we were doubtful we could really do it.”

At first, seven members who were called the village’s “youths” were gathered and Wanju County provided them with instruments and an instructor. Lessons were taken every Wednesday night for two hours, but it was not easy for complete beginners to master the instruments.

Even finding finger positions and fundamental tones were challenging for them, so they drew fingers on the music sheets to minimize confusion.

Two members soon dropped out because it was too exhausting to have music practice at night after farming in the daytime.

But the rest of them comforted each other and practiced enthusiastically and consistently for six months. As a result, their music skills have improved markedly to a level of being able to sight-read. A group of seven sassy local grandmothers provided the vocals for the band. The Hwa-Baek Band became a symbol of the village and has been invited regularly to various cultural events in Wanju.

“Bibijung village shows it is possible to have a vibrant community with men and women of all ages cooperating together,” said Lim Jung-yup, a governor of Wanju County.