48% want Ahn to serve before he runs: Survey

48% want Ahn to serve before he runs: Survey 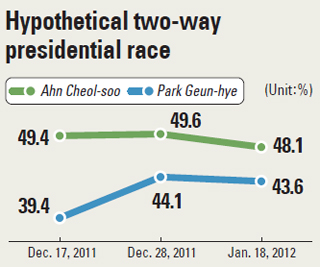 Nearly half of Koreans think Ahn Cheol-soo, a software mogul and rising liberal star, should serve in elected office or a party post before running in the presidential election, a recent poll by the JoongAng Ilbo showed, indicating a public desire to confirm Ahn’s political and governing abilities.

The JoongAng Ilbo commissioned Gallup Korea to conduct a special opinion survey. A telephone survey of 1,021 people nationwide was conducted on Wednesday regarding various political issues.

According to the poll, 48.3 percent said Ahn must go through the process of running in an election to become an elected official or to work as a party official before running in the presidential election, while 33.4 percent said they disagreed.

Some of Ahn’s supporters agreed that they want Ahn to go through the process. Of the 491 people who said they would vote for Ahn in a two-way match against Grand National Party presidential front-runner Park Geun-hye, 41.8 percent said they think Ahn needs to be an elected official or serve as a party official before his presidential bid.

The public also wants the largest liberal opposition Democratic Unity Party to recruit its presidential candidate from outside the party.

For an outside recruit, 36.4 percent said Ahn should be invited to be the DUP’s presidential candidate.

Among DUP officials, Moon Jae-in, former chief of staff for the late former President Roh Moo-hyun, was ranked highest as the presidential candidate with 14.5 percent. Han Myeong-sook, the DUP chairwoman, followed with 11.4 percent, while former chairman Sohn Hak-kyu was backed by 10.2 percent.

The poll also showed that Park continued to be the strongest presidential contender in a race with multiple candidates.

Asked who they want as the next president, Park was backed by 28 percent, while Ahn was backed by 20.4 percent. Moon was supported by 9.6 percent and 12.2 percent said they support other candidates.

At the time, Moon was supported by 5.8 percent.

Ahn, however, was the winner of a two-way race against Park. He was backed by 48.1 percent, while Park followed close with 43.6 percent.

The telephone survey had a confidence level of 95 percent and the margin of error was plus or minus 3.1 percentage points.