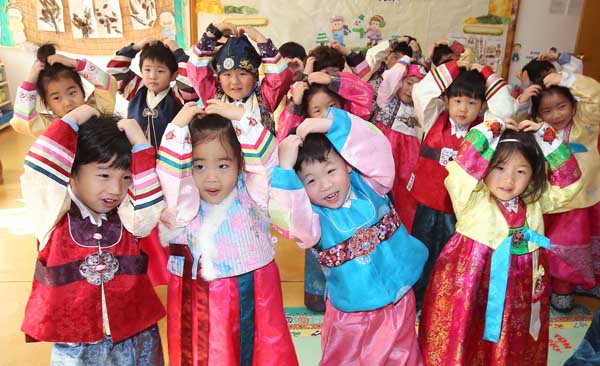 Children in traditional Korean attire make heart shapes yesterday to show their affection to their teachers at a kindergarten in Busan after they bow for their Lunar New Year greetings. Children usually receive cash after bowing, but this year parents are opting for more practical ideas. By Song Bong-geun


An 80-year-old woman, Oh Hee-ki, recently visited a bank and opened an installment savings bank account with 250,000 won ($220) for her 26-year-old granddaughter as a Lunar New Year holiday gift.

She said that traditionally she used to give the cash but decided to open the account as she wanted to help her granddaughter in a more practical way.

“I wanted my granddaughter to have a wealthy year and also to help her have financial investments for the future,” Oh said. “I hope she can use the money in a more productive way because many people are recently having a hard time under poor economic conditions.”

The cultural landscape of the Lunar New Year holiday is being changed for Koreans. Under the poor economy, many people are trying to spend their money wisely, providing diverse gifts such as bank savings accounts and insurance programs to benefit their children in a practical way.

Smartphones are also contributing to the change of the holiday culture. Many people are purchasing electronic coupons for popular New Year gifts, such as Korean ginseng.

Ahn Yeh-seul, the granddaughter of Oh, purchased an electronic gift certificate coupon for a red ginseng package. “I decided to purchase this because I wanted to teach my grandmother how to use a smartphone,” Ahn said. “She always tries to live youthful and I think this gift will be helpful for her.”

SK Marketing & Company, an SK affiliate, said that the electronic gift coupons are getting more popular this year and the sales volume has increased five times in the last three years.

“More people are choosing to purchase popular New Year gifts such as red ginseng and wholesome foods through smartphones because it is easy and convenient to give the gifts, especially for people who are busy and live far away from each other.”

The SK Networks, another affiliation company of SK Group, said it will give cake coupons to every worker as a holiday gift.

A 40-year-old man surnamed Hwang received an insurance program for his 10-year-old son from his parents last week.

“My father told me that he decided to provide this present for my son because he is worried about the school bullying that is reported in the media every day,” Hwang said.

Officials in the insurance and banking industries said that the number of clients who open insurance programs and make financial investments has increased recently.

“Many elderly customers are looking for programs that can strengthen their grandchildren’s safety and economic conditions,” a banker surnamed Lee told the JoongAng Ilbo.