Park out of ammo in EPL debut for Gunners

Park out of ammo in EPL debut for Gunners 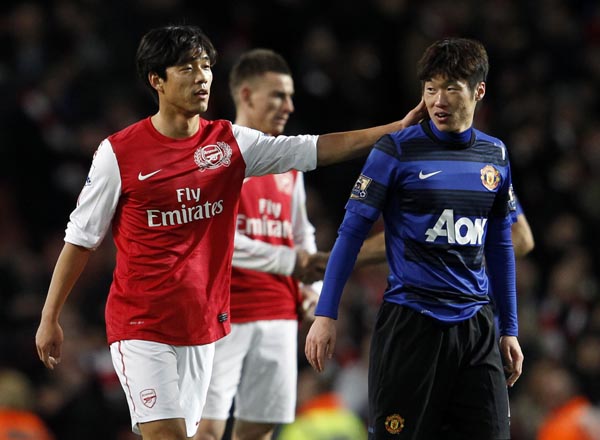 Some described it as a strange twist of fate. Others, perhaps a little more romantically, saw it as a special gift from manager Arsene Wenger on Lunar New Year’s Day.

But whatever the reason, Koreans finally got to watch Arsenal striker Park Chu-young make his historic English Premier League debut on Sunday in London - against none other than Manchester United midfielder Park Ji-sung.

United won the encounter 2-1 after a stellar performance by Antonio Valencia to stay second in the table with 51 points, three behind cross-town rival Manchester City. Arsenal is fifth, with 36 points.

Park, who joined the club late last summer and first played for the Gunners in a UEFA Cup match in November, had scant time to prove himself on his Premier League debut after he was brought on as a late sub. Wenger decided to rest on-loan Thierry Henry and summoned Park in place of Aaron Ramsey to help find an equalizer in the final 10 minutes of the game.

But while his compatriot Ji-sung, who was brought on in the 76th for Rafael Da Silva, played a part in Danny Welbeck’s game-winning goal in the 81st, Chu-young (or should I say Ju-young, because of the way his name is spelled on his jersey?) made little impact.

In fact, after the 27-year-old failed to get a shot on goal, fans began sending tweets at the former AS Monaco player’s expense. One summed up his performance in derisive detail: “Chu-young had four passes, one header and one argument with the ref!”

Prior to Sunday’s game, Park had only featured in four games for Arsenal - three Carling Cup matches and one UEFA Champions League match. Some fans even worried he might end up like Japan’s Junichi Inamoto, who joined Arsenal in 2001 but ended his year-long spell there without playing a single league match. And with the recent return of legendary striker Henry from the New York Red Bulls, all hope looked lost for Park.

Even though he got his chance on Sunday, 10 minutes is not much time to get one past United, as Park soon discovered. In retrospect, though, it was a golden opportunity for the Korean striker. If he could have bagged the late equalizer - as Sunderland’s Ji Dong-won did against Manchester City on Jan. 1 to scrape a point for the Black Cats - Park would have raised his status at the club. This is why I had been expecting to see him come tearing out of the stands, show more aggression on the pitch and prove to fans that he deserves more than their mockery.

British media were also fairly dismissive of his appearance, with Sky Sports brushing it off as nothing more than a “late cameo.”

What I am concerned about now is that he could remain a bit-part player during his remaining spell with the club, and how this may affect his status with the national team. Korea coach Choi Kang-hee has also expressed concern about Park in the past.

So while I acknowledge that Park’s league debut is good news, it’s not worth getting too excited about, especially as he only got his chance because Henry was injured and Marouane Chamakh and Gervinho were busy with the Africa Cup of Nations.

Moreover, the fact that 19-year-old winger Alex Oxlade-Chamberlain started the match and put on an impressive performance heaps more pressure on Park. He will likely face tougher challenges in the future, especially if injury-prone Robin Van Persie stays in good health and continues to find the back of the net.

So far, Chu-young has refrained from publicly commenting on his EPL debut, and this is probably not a bad idea because he did little to shout about. However with a little luck, he will get another chance. Either way, at least he has already escaped the shameful fate of Inamoto, who never got to touch the ball during league play.