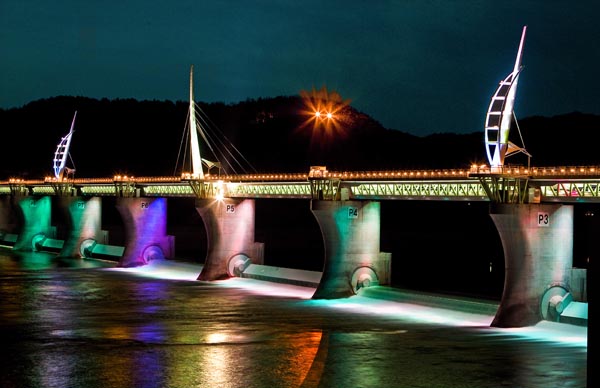 Gangcheon Weir features sculptures that are shaped like the Hwangpo sailing ship that used to navigate the area around the Namhan River. By Shin Dong-yeun

One area that has often been overlooked by Seoulites as a close weekend trip destination is Yeoju County, Gyeonggi. Yet the riverside area has close ties to the capital, both geographically and historically, and is full of places for sightseeing and leisure for the whole family.

For example, the old name for the Han River, which runs through Seoul, was the Yeo River, because its waters flowed all the way to Yeoju.

More recently, Yeoju gained attention among the Korean public for being the area that benefited the most from the controversial four-rivers restoration project, a government initiative that aimed to restore the areas surrounding Korea’s four major rivers including the Han, the Geum, the Yeongsan and the Nakdong. The three weirs for the Han River, built during the four-rivers project, are all situated in Yeoju. And the project completion ceremony, held late last year and attended by President Lee Myung-bak and other high-level government officials, was held in Yeoju as well.

The first thing you’ll see upon entering Yeoju from Yangpyeong is a large, 18.2-meter (59.7 feet) sculpture in the Namhan River. Weighing around 45 tons, the structure that forms Ipo Weir has become the symbol of Yeoju. Its distinct shape, which includes connected poles with round tops, stretches along the Namhan River. The round tops symbolize the eggs of a white heron, the symbolic bird of Yeoju, and include winches to control the floodgate. Of the 16 reservoirs that were built for the project, Ipo Weir is considered by many to be the most beautiful, especially during the morning when the fog rests on top of the structure.

Visitors can walk or bicycle along Ipo Weir. It takes around 10 minutes on foot to get from one end to the other, during which time one can take in the scenery around Namhan River, including Dangnari Island.

There are also various leisure facilities around Ipo Weir. The soon-to-be open Sports Park, for example, includes a campground and a baseball park. There is also a park where families can picnic, a garden of wild flowers suitable for an afternoon stroll and an ecology park.

Another reservoir worth a visit in Yeoju is Gangcheon Weir, which is around 22 kilometers away from Ipo Reservoir.

Gangcheon Weir and the surrounding areas are great for bicycling. A typical bicycle trip in Gangcheon Weir would start in Geumeunmorae Gangbyeon Park, where visitors can rent bicycles. The park also has a large field, campground and an ecology park with various wild flowers as well as miniature sculptures of Korea’s national treasures including the Monument of Joongwon Goguryeo and Gyeongbok Palace.

It takes around 10 minutes by bicycle to get to Gangcheon Weir from Geumeunmorae Gangbyeon Park. Gangcheon Weir is shaped like the Hwangpo sailing ship that used to roam the Namhan River. Every night at 6 p.m., the weir is lit up with soft lights.

Another destination in Yeoju is Gangcheon Island, situated approximately 5 kilometers from the center of the Namhan River. This island used to be an abandoned site but after Gangcheon Weir was built, the Yeoju city government announced grand ambitions for the place, including an aim to make it into a major tourist destination similar to Nami Island. The distance from Geumeunmorae Gangbyeon Park to Gangcheon Island is around 8 kilometers and it takes about 3 hours round trip by bicycle to get back to the park from the island.

Even before the four-rivers restoration project began, Yeoju was a place with a thriving culture and heritage. The county includes the birthplace of Empress Myeongseong, the tomb of King Sejong and Silleuk Temple, a Buddhist temple that was a prayer sanctuary to the royal mausoleum of King Sejong.

The tomb of King Sejong and his queen, Soheon, is called Yeongneung. Yeongneung is a designated Unesco World Heritage site. It was also the first joint royal tomb constructed during the Joseon Dynasty and, as such, it is much bigger than other royal tombs of the period. Also, unlike other royal tombs, visitors are allowed to walk right up to the tomb and examine the various stone statues guarding it.

Another attraction nearby is Silleuk Temple. The Buddhist temple, which sits against a hill on the northern side of the Namhan River and close to the Yeoju Bridge, is the only temple in the country located right next to a river. Silleuk Temple is often referred to as the “wall temple” because of its six-tier brick pagoda, Gangwulhyeon, which overlooks the Namhan River.

The temple also houses a 600-year-old ginkgo tree. Legend has it that the tree was struck by lighting a long time ago and afterward it began to resemble the Buddhist Goddess of Mercy. There are still a lot of visitors who visit the temple just to see the tree.