After 17 countries, new insight on Islam

After 17 countries, new insight on Islam 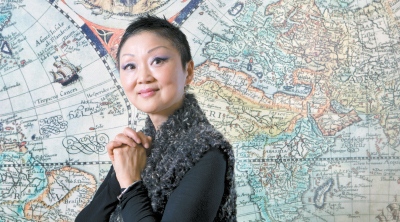 Chung Hyun-kyung spent a year traveling around 17 Islamic countries in order to gain insight into the people, religion and culture. Her interviews with 200 women in those countries form the basis of her new book, “Like Flowers in the Garden of God.” By Park Sang-moon

A week after the Sept. 11 terror attacks, theologian Chung Hyun-kyung ran to Ground Zero with a group of students of Thich Nhat Hanh, the world-famous Vietnamese Buddhist monk. They circled around the site, meditating on life, death, religion and war. The more she thought about what had happened, the more she wondered why the Islamic extremists would commit such horrible crimes in the name of Allah.

This prompted Chung, the first Asian to become a tenured professor at the Union Theological Seminary in New York, to begin an intensive study of Islamic religion and culture. As she saw interest in Islamic languages and culture grow, she had begun to feel regret about her lack of knowledge on the subject. Meanwhile, her school had opened a number of courses on Islamic studies, so she took those classes with her students. She described her feelings during that time in a Jan. 3 interview with the Korea JoongAng Daily in Jamsil, southeastern Seoul, where she was staying at a friend’s house.

“As a scholar and educator who delivers ‘truth’ to young people in the United States, I am responsible for learning the teachings of Islam to help my students better understand the religion and the culture,” she said. “Also, I couldn’t just sit and watch the non-Islamic world, led by the U.S., demonize Islam, characterize young Muslim men as potential terrorists and define Muslim women as victims of a patriarchal religion.”

Five years later, Chung took a sabbatical during which she embarked on a year-long pilgrimage to 17 Islamic countries, including Turkey, Morocco, Iran, Egypt, Syria, Lebanon, Pakistan, Bangladesh, Indonesia and Israel. That she had turned 50 that year made her even more determined to take the trip. 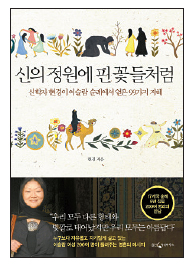 “According to the Confucian tradition, at age 50 you come to realize heaven’s will, and Hinduism teaches that when you become 50 years old, you complete your earthly duties and enter the woods to concentrate on the conversation with God,” she said.

She even had her will notarized before leaving because in some of the countries she was to visit, the U.S. was in the middle of military operations against terrorism.

Four years after she returned, she completed a book about the experience. The nearly 600-page work, “Like Flowers in the Garden of God,” was published last November. The English translation is due out in the United States by the end of the year.

The book is based on interviews with 200 Muslim women who she met during her trip. Her interviewees include intellectuals such as Wangari Muta Maathai, the first woman in Africa to receive the Nobel Peace Prize, and Mukhtaran Mai, a Pakistani woman victimized by honor crimes who attracted support from the global media and women’s groups and eventually saw her attackers convicted.

Four days after the interview, Chung left for a monastery in Myanmar with her students for an intensive vipassana Buddhist meditation practice. Before going back to New York, she will have a book publication party in Seoul on Jan. 27. The following are excerpts from the interview.

Q. What did you learn through your encounters with women in the Islamic world?

A. From the point of view of outsiders, they were always depicted as victims who didn’t really have their own opinions. I learned that they were the same as women in the non-Islamic world, especially from the fact that the pursuit of happiness is their top priority. Like us, they wanted to be respected and protected by the law and social system. They wanted equality of education and occupation as much as women of the rest of the other world did. I also realized that our perception of Islamic culture has been overly stereotypical - chauvinistic, male-oriented and belligerent. But I encountered an array of romantic and beautiful art, music and poetry throughout my trip.

Could you name some of the most common misunderstandings of Islamic culture that you have come to recognize after your trip?

There have been three focal points of attention surrounding Islamic women - polygamy, chador and honor killing. As for polygamy, the majority of them expressed an abhorrence of the matchmaking system, but those who assent to it have their own logic, which I found pretty realistic and reasonable. In any part of the world, monogamy is far from successful, they claimed. There are mistresses and concubines and many of them give birth to illegitimate children. In the Islamic world, however, multiple wives and their children are at least legally guaranteed a financial reward. Fair enough.

Regarding chador, many female Muslims think they can protect themselves by wearing it. Some even consider the chador as a bargaining tool to obtain freedom, not as a symbol of repression. One woman told me, “When we are in chador, men respect us because it gives us credibility as a sincere believer.” She asked me if we [women in the rest of the world] really think we are free from the patriarchal system. Some of them criticized us for constantly selling our sex to men by exposing ourselves and constantly improving our appearance through weight control and plastic surgery. Of course, honor killing is something that is unanimously believed should be eradicated.

How did the trip affect your view of religion?

I was born into a devout, third-generation Christian family. But after I practiced asceticism at Shinwon Temple on Mount Gyeryong in South Chungcheong for 100 days in 1999, I shaved my head and spent a year in the Himalayas as a Buddhist monk. After finishing my tour of Islamic countries I was able to embrace Sufism [Islamic mysticism, which is widely acknowledged to have contributed to Islamic literature - including the work of the poet Rumi] from the bottom of my heart.

In the world of religion, the deeper you get into it, the better understanding you can have. At the heart of every religion there is this universal love of God, no matter which God you worship. Religion is like a language. People have different languages to communicate with God. But from the perspective of God, who is at the top of the universe, he will understand us regardless of which language we use.

Some people describe me a dual citizen when they refer to my religious beliefs. But my goal is not to become such a person. I want to be an interpreter of religion.

Some scholars of religion have criticized you for being syncretistic.

I think every religion has syncretistic elements and I don’t think syncretism is necessarily bad. [German theologian] Rudolf Bultmann once said that Christianity was itself “a remarkable product of syncretism.” I used to be a Buddhist Christian and now I define myself as a Buddhist Christian Sufi. What other religion I might add in the future, I don’t know yet. I am also very curious to know.

What is your advice to people who feel they are losing their religious faith?

I would recommend that they take a look at themselves in a silent space rather than trying to go to church more often. There are three steps in meditation - stopping a craving, breathing and then looking deeply into your truth. Sometimes, engaging in physical activity helps with meditation. I practice 108 bows every morning. [In Buddhism, it is believed that humans experience 108 earthly desires in their lifetime, so one must bow 108 times to eliminate them.] Our brains have no pride at all. Your thoughts change many times, even in a second. But your body is more honest, and using your body when meditating makes you better able to reach your inner self.

You say in your book that strict monotheism causes more global conflict than less fundamental styles. Could you elaborate?

The Christian denomination that entered Korea seems particularly exclusive and conservative, although not all Christian sects are supposed to be that way. It is regrettable that many Christians here belittle and demonize the believers of other religions. A true Christian would not claim that he or she is always right.

I also want to say that religion and politics should be separated in Korea. The president’s being an elder at a Presbyterian church is far from significant. If he is a sincere believer, he only needs to spread the compassion, wisdom, love and justice he has learned through his religion, rather than favoring people of the same religion as his.