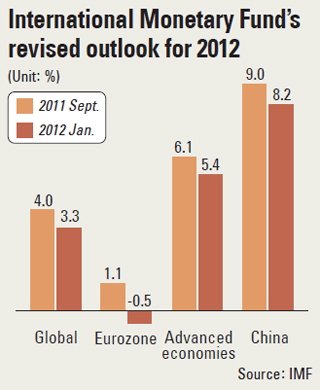 The IMF projected that the euro zone will post negative growth of 0.5 percent in 2012, a drop of 1.6 percentage points from its earlier forecast of 1.1 percent growth.

Spain, which is at the heart of Europe’s fiscal woes, saw its growth outlook slashed from 1.1 percent to minus 1.7 percent, while Italy, the other lead player in the multi-act drama, had its growth forecast downgraded from 0.3 percent to minus 2.2 percent.

Even Europe’s strongest economies could not escape the IMF’s crosshairs, with Germany expected to grow by 0.3 percent and France by 0.2 percent.

Meanwhile, China, which has posted exceptional growth in the last decade, is likely to face a slowdown this year. Its outlook was cut from 9 percent to 8.2 percent.

As a result Korea’s economy may also feel the brakes applied. Its outlook was not included in the IMF’s latest release, but the fund in September lowered its forecast of the country from 4.5 percent to 4 percent for the year ahead.

Its position on the U.S. remained unchanged at 1.8 percent, while Japan took another hit as its growth potential was downgraded from 1.7 percent to minus 0.6 percent.

However, the international body noted that the amendments do not indicate that the world is facing a major economic shock but rather a deceleration.

The revised views were based on the assumption that the European government will act swiftly to stabilize the debt crisis in the euro zone. The IMF said in the report that advanced economies need to move fast to recover their lost credibility, while also maintaining a loose monetary policy to guarantee sufficient liquidity.

Earlier this month, the World Bank also lowered its outlook on the global economy from 3.6 percent to a more conservative 2.5 percent. Europe’s economic forecast was slashed from 1.8 percent to 0.3 percent.

This is likely to have a huge impact on the Korean economy, which depends for more than 50 percent of GDP on exports.

Since the beginning of this year, Seoul has been trying to revive the flagging domestic market to cushion the blow from a contracting global economy, which would result in weaker demand for its exports.