Outlooks on gold and won divided due to uncertainty

Outlooks on gold and won divided due to uncertainty 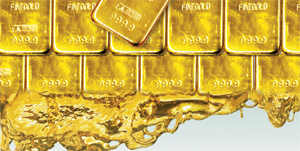 Employees at leading conglomerates who received lucrative year-end bonuses may not be able to resist seeking investment outlets for their newfound gains.

But while all this surplus cash may heat up the search for profitable investments, the last few months of rollicking stocks, unstable currency values and seesawing gold prices invites a cautious approach.

This year, although local think tanks and global investment banks are offering different outlooks for how the won will fare against the dollar, gold forecasts are being revised down to reflect the latest drop in prices.

Furthermore, experts seem united in their belief that Europe will continue to dictate how markets function in the near future as uncertainty reigns despite successful short-term debt sales in the past two weeks in Italy, Portugal, Spain, France and Belgium.

Known as a volatile currency due to Korea’s exposure to external economic conditions, the won rode a particularly relentless roller coaster last year as it strengthened, then weakened dramatically, against the dollar.

After starting the year off at 1,126.5 won to the greenback, the won rose against the dollar between March and the end of July. This prompted financial policymakers to restrict the inflow of dollars by methods such as regulating kimchi bonds, a kind of foreign-currency-denominated bond named after the nation’s favorite side dish.

However, as risks grew in August fueled by the downgrading of the U.S. sovereign rating and the burgeoning euro zone debt crisis, the local currency plummeted against the dollar to a low of 1,208.2 on Oct. 4. The currency fell by 159 won to the dollar in just two months, causing import prices to skyrocket and leaving consumers saddled with higher inflationary pressure, while companies struggled to find remedies by tweaking their business plans.

“The spread of uncertain external conditions not only caused the won to drop, but drove up volatility at the same time,” said Hwang Hyun-jung, a research fellow at the KDB Economic Research Institute.

As of last Friday, the won has averaged 1,151.3 against the dollar this year, compared to an average of 1,108 won in 2011, according to the Korea Center for International Finance (KCIF). Nonetheless, the Korean currency still hit a high of almost 1,200 won last year.

Domestic and foreign experts are divided on just how far the won will rise this year. As of the end of last year, six domestic think tanks and banks, including Samsung Economic Research Institute (SERI) and Kookmin Bank, projected it would hit a median of 1,073 won to the dollar in 2012.

Yet Morgan Stanley, UBS and 18 other global investment banks forecast it would be much weaker, or 1,130 won to the dollar on average, according to Bloomberg.

More analysts agree that the won will remain weak during the first half of the year then begin firming up in the latter six months.

“When the euro zone crisis begins to dissipate by the second half of 2012, the won is likely to gain against the dollar,” said Jung Dae-sun, a research fellow at SERI.

Analysts also did not rule out another roller-coaster ride of currency exchange rates.

“We expect more won-dollar volatility as deepening fears of a global economic slowdown work against the fact that Korea enjoys stronger economic growth than most advanced nations,” said Hwang.

“The reason that gold prices dropped at the end of last year was due to investors redoubling their efforts to secure cash as global economic conditions worsened,” said Choi Eun-gyu, vice president of Korea Gold Exchange, a private gold dealer.

“Unlike dollars, gold is not a pure cash asset because it takes an extra step - conversion into a currency - before it can be used as cash. The U.S. dollar is not only a cash asset, but is also viewed as a safe asset, leading to heightened investor interest. So a strong dollar contributed to falling gold prices,” Choi added.

While many forecasters still see a possibility of gold touching $2,000 an ounce this year, the drop late last year has caused global investment banks and consulting agencies to revise down their bullish forecasts.

Last week, Morgan Stanley cut its 2012 gold price forecast by 16 percent to $1,845 an ounce, reflecting the belief that the U.S. dollar will continue to strengthen.

Leading consultancy Thomson Reuters GFMS also last week forecast an average price of $1,640 an ounce in the first half of the year, implying little change from the status quo.

However, since the beginning of 2012, gold prices have rebounded. Gold futures for February delivery rose 0.9 percent to settle at $1,678.30 an ounce on the New York exchange on Monday, as investors generally became more satisfied with the level of risk.

Some experts also hold the view that gold will stretch its broad winning streak to a 12th year on the back of increased investor demand.

“Even if the European economy recovers, gold prices are bound to rise as inflationary pressure is likely to continue due to increasing liquidity in the long term,” said Choi, the Korea Gold Exchange official.

“Historically, gold holdings are a fundamental part of what makes a key currency, and because China is looking to raise the status of the renminbi to match or exceed the U.S. dollar eventually, it will continue to buy gold.”