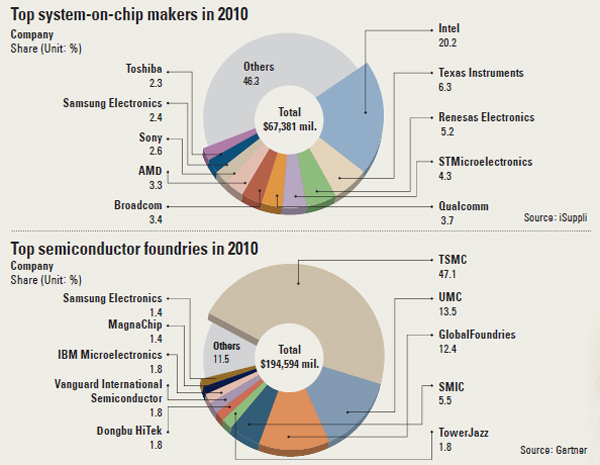 Shortly after Samsung Electronics announced it is parting ways with Sony in their joint venture in LCD (liquid-crystal display) panels, the company announced that it will set up a new venture in nonmemory chips with companies including NTT DoCoMo, Fujitsu, Fujitsu Semiconductor, NEC and Panasonic.

Technology critics closely monitor every move by Samsung, the world’s largest maker of flat-screen TVs, LCD panels and memory chips. And many see the new venture as indicative of changing trends in the IT industry.

In the realm of panels, LCD prices have been falling consistently, fueling speculation that OLED (organic LED) TVs will replace LCD screens in the near future. Meanwhile, DRAM memory chips have become less lucrative, while nonmemory chips for smartphones are thought to yield greater profits.

Panels and chips have been the two main pillars of Samsung’s parts and components business, with Apple, Sony and of course itself ranking among its top clients. 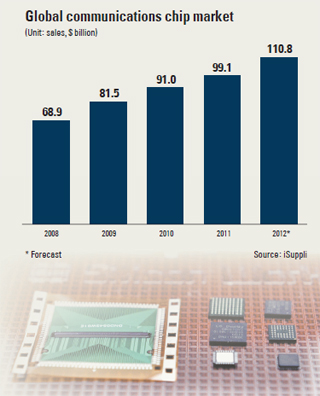 Both announcements came after Kwon Oh-hyun, who formerly served as president of the company’s recently merged chip and display division, was promoted to a vice chairman’s role in a managerial reshuffle that took place in December.

Samsung’s new venture will be chiefly responsible for designing and developing a next-generation communications chip, the company said. If successful, it could threaten Qualcomm’s long dominance of this business segment, insiders note.

The venture will be set up in Japan in or around March, market insiders told Korean media last month.

“We will discuss the manufacturing process and the time when we will start mass production in more detail later,” a Samsung spokesman said.

In particular, the new venture will roll out chips that will be used in smartphones that work on LTE (long-term evolution), a fourth-generation (4G) wireless technology that phone makers and carriers worldwide are adopting.

Given the explosive growth of smartphones as well as the rapid switch to LTE in terms of devices, networks and other infrastructure, there is more of a need than ever for companies to reduce their reliance on Qualcomm and work on high tech communications chips.

Communications chips are categorized as nonmemory chips, something that both Samsung and Hynix, the No. 1 and No. 2 memory chip makers, are trying to get better at.

Nonmemory chips - or system-on-chip solutions, as industry insiders refer to them - control entire computing systems such as application processors in mobile devices, or CPUs (central processing units) in PCs. In contrast, DRAM and NAND memory chips chiefly function to store or read data.

Samsung has been increasing its focus on its nonmemory chip business in recent years, as prices of DRAM chips have fallen significantly, especially in the last few months. Non-memory chips are more profitable than conventional memory chips and less dependent on price fluctuations.

Samsung is expected to pour about 7 trillion won into its nonmemory chip business this year. Samsung Group, Korea’s largest business conglomerate, announced this week that it will invest a record 47.8 trillion won ($41.6 billion) this year despite lingering economic uncertainties at home and abroad.

“As the smartphone business is expanding, the integration between memory and nonmemory chip businesses have become very important,” said Lee Seung-woo, an analyst at Shinyoung Securities.

As such, Hynix has also been assuring its investors that it plans to improve its financial health by devoting more funds to the value-added, nonmemory sector. SK Telecom, which purchased a controlling stake in the company last November to become its new owner, has also stressed its commitment to ramp up investment.

Another implication of Samsung’s new chip venture is its ambition to grow as a “foundry” company. A company can be considered as such if it has a semiconductor fabrication plant and also fabricates chip designs for other companies that lack such facilities. These are often referred to as “fabless,” or fabrication-less.

Samsung is the world’s 10th-largest foundry company, with clients including Apple. Observers say the new venture will further raise its profile and capacity in this business area.

“We see the foundry business as a [future] growth engine,” Kwon said at Samsung Mobile Solution Forum in Taipei, Taiwan, last October. “Although we are a latecomer in this area, we believe we have a good chance of succeeding with our advanced technology in mobile devices.”

Insiders say Samsung has received many orders to fabricate semiconductors lately and that it is planning to expand its facilities to meet demand.

Orders have risen in line with new industry trends and especially demand for a wider spectrum of chips in tandem with the emergence of smart mobile devices.

Samsung’s technological prowess has also played a role and is attracting customers that have long been loyal to other brands. Reports surfaced recently that AMD, an American semiconductor firm that has been a major client of Taiwan-based TSMC, began placing orders with Samsung in recognition of its advanced technology in chip manufacturing.

In October, Samsung revealed it had begun supplying digital camera chips for Ambarella, an image-processing semiconductor company in the U.S., which is the second such collaboration between the two firms since they began such a partnership in November 2010.