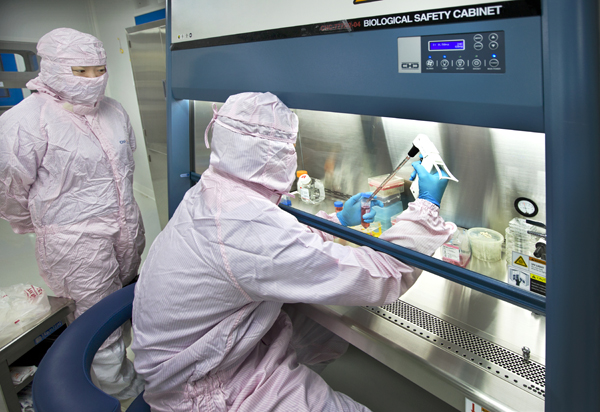 A researcher of CHA Bio & Diostech cultures stem cells at the “Good Manufacturing Practice” room at the CHA Medical Center in Bundang, Gyeonggi. By Park Sang-moon

Five researchers, clad from head to toe in sterilized surgical attire, assiduously prepared for a stem cell transplant, extracting from the blood of an umbilical cord and implanting the cells into an 80-year-old patient with cerebral palsy.

“We will be injecting stem cells we produced from umbilical cord blood into the patient,” explained Chung Hyung-min, president of CHA Bio & Diostech at the Chaum Global Stem Cell Clinical Trials Center in Bundang District, Gyeonggi.

“This treatment has been showing some good results in trials, and previous patients have shown significant improvements within a six-month follow-up period.”

According to medical experts, one of the first signs of improvement in patients suffering from cerebral palsy after stem cell treatment is an increase in muscle tone, often followed by improved vocabulary, socialization and logical comprehension. 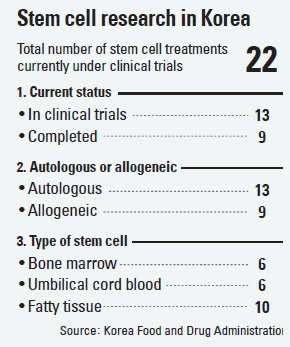 Operating rooms of the medical center’s stem cell clinical trials center are designed to allow for the quick transference of stem cells extracted in laboratories to patients undergoing surgery. According to Chung, the CHA Medical Center is the first facility to adopt such a design, and others may follow suit in the near future.

The emergence of stem cell treatments like those seen at the Bundang medical center comes just six years since the Hwang Woo-suk scandal shattered hopes of Korea’s emergence as a biotech hub.

The country had been considered a global leader in human embryonic stem cell research until review boards affirmed in 2005 that a team led by Hwang had manipulated key data in its studies on cloning stem cells, shocking the global scientific community.

The scandal catalyzed a rise in regulations and deflated the local biotech industry.

Voices concerned with the ethical implications of the practice grew louder, and the government soon responded with policies. Before Hwang’s fraudulent paper, transplanting human somatic cells to animals was permitted. After 2005, the Bioethics Law was revised, and the practice became more restricted.

Approval standards for stem cell research also became stricter, and the centers that had once violated the rules had their research rights revoked. The system to provide and receive eggs was established, and the power of the National Bioethics Committee grew substantially.

Within the past year, however, Korea has steadily regained its place as a stem cell research powerhouse, relaxing regulations and producing the world’s first three commercialized stem cell treatments.

In July 2011, Hearticellgram-AMI, developed by Korean biotechnology firm FCB-Pharmicell, was approved by the Korea Food & Drug Administration as the world’s first stem cell treatment for clinical use for heart attack victims and signaled the country’s first salvo to put research back on the front line.

Noticing the country reclaiming its momentum in biotech research, President Lee Myung-bak vowed in September of last year to make a series of regulatory reforms easing clinical and licensing procedures and promised to invest nearly 100 billion won ($89 million) in stem cell research in 2012.

Lee said in his biweekly radio address last September that stem cell research is “very rewarding and significant in that it can give hope to those who suffer from rare and intractable diseases,” and added that “the government has decided to foster the stem cell industry as a core new growth engine following the footsteps of the IT industry.”

He also said the reforms would help the KFDA and other agencies “to ensure that they proactively adapt to the changes in the international environment.”

With the world’s only existing stem cell treatments approved by a national food and drug administration, some analysts insist that Korea is in fact already a leader in adult stem cell research.

According to FCB-Pharmicell, its groundbreaking Hearticellgram-AMI is administered directly to the heart. Stem cells - which have the ability to differentiate cell types such as neurons, blood cells and chondroblasts - find their way to damaged areas of the heart and regenerate cardiac tissue.

The company said it conducted clinical trials on 40 patients over the past five years and was able to increase the heart ejection fraction, which is the share of blood ejected from the heart’s right and left ventricles when they contract, in all patients by an average of 5.93 percent, while another 40 patients who did not receive the treatment saw their fraction rise only by 1.76 percent.

Meanwhile, Medipost’s damaged cartilage treatment Cartistem was produced using allogeneic stem cells, which come from a donor that has genetically similar but not identical stem cells, as opposed to autologous stem cells that are extracted from the patient.

The Cartistem treatment is the world’s first allogeneic stem cell treatment, which is advantageous because it has a higher mass-production potential and consistent treatment efficacy.

Forty-three patients participated in a clinical trial with Cartistem, according to Medipost, and after 48 weeks, 42 patients were able to confirm improvements.

About 15 percent of the world’s population is reportedly suffering from cartilage and joint damage such as degenerative arthritis and rheumatoid arthritis.

When 33 patients underwent a clinical trial with Cupistem, the fistulous openings completely closed for 27 patients eight weeks after the injection.

“Moreover, there is no other country in the world that has the largest number of general hospitals that has more than 500 sickbeds. Korea secures both quality and quantity.”

“Korea accommodates institutional infrastructure that is up to the global standard, such as the Institutional Review Board, the Food and Drug Administration and the Bioethics Committee.”

With this infrastructure, Lee added, and “excellence in clinical trials,” Korea was able to “commercialize stem cell treatments first.”

There are currently seven stem cell research institutions in Korea that are registered under the Korea Centers for Disease Control and Prevention.

Among the seven, however, CHA Bio & Distech is the only facility approved by the government to conduct embryonic stem cell research, which is derived from preimplantation-stage embryos. The other six work with adult stem cells.

“However, an embryonic stem cell is from an embryo, which means it can be manipulated into any kind of cells. But due to the number of issues regarding ethics and safety, research in this field has been slower than adult stem cell research.”

“Investors and firms are reluctant to invest in embryonic stem cell research as it carries a label of not being bioethical,” said Chung. “Moreover, it is much harder to make, not to mention turning it into a treatment.”

Chung said there are only four embryonic stem cell treatments that were approved to go into clinical trials.

The first one was American biotech firm Geron’s embryonic stem cell treatment for spinal cord injuries. However, the company announced in November that it is “dropping its entire program, [which is in its phase 1 trial], owing to financial concerns.”

The other three are all CHA Bio & Diostech’s products.

Embryonic stem cell research is clouded by moral and ethical issues as it involves the use of human embryos to obtain cells.

According to CHA Bio & Diostech, Korea and the United States are in a leading position not only in adult stem cell research but also embryonic stem cell research as both countries “quickly made reforms to ease regulations and make national-level investments.”

“CHA Bio & Diostech and the U.S. firm Advanced Cell Technology have recently completed a dosing of a patient in a phase 1/2 trial of one of our three embryonic stem cell treatments,” said Chung, referring to the treatment using retinal pigment epithelial cells derived from human embryonic stem cells to treat blind patients with Stargardt’s Macular Dystrophy.

“At this point, I can only say that we have some very successful results. We may be able to officially announce the results within this month or early next month.”

According to data provided by the Ministry of Health and Welfare, Korea ranks fourth in the world after the United States, Japan and the United Kingdom in the number of stem cell patents. The ministry said that if the country braces up the system, it has the competitiveness to be the leader in stem cell research.

According to the Health Ministry’s report last year, while Korea’s stem cell research was “faltering after the Hwang scandal, many countries began easing regulations concerning stem cell research and began their investments on a national level.”

The ministry continued to say that “the U.S. allowed the federal government’s support in stem cell research in 2009, while Japan was the first country to successfully change the somatic cells into stem cell, and recently, the United Kingdom and China jumped into the area as well.”

Chung echoed that Korea is still behind other industries and needs to catch up.

“Although Korea was first to commercialize stem cell treatments, I believe stem cell research is still in its initial stage in Korea,” he said.

“The next three to five years are critical to successfully continuing the commercialization of stem cell treatments. Korean stem cell researchers must study very hard and produce many successful cases.”

In order for Korea to get back in the league as a stem cell pioneer, Chung said two elements are especially crucial: more financial support and stronger software infrastructure.

“Although President Lee promised to invest about 100 billion won in stem cell research this year, research and development of this industry is very expensive,” said Chung.

“In the U.S., there are diverse ways for stem cell treatment developers to receive financial support, such as the federal government, the state government, donations and many more, but in Korea, it’s either from the government or companies.

“The U.S. uses about $1 trillion to $2 trillion per year on stem cell research, and Japan invests about 75 billion won a year to [Shinya Yamanaka, a famed professor,] who studies stem cells.

“Although it’s good that the government decided to increase the investment, 100 billion won per year for the whole country is relatively small amount for stem cell research.”