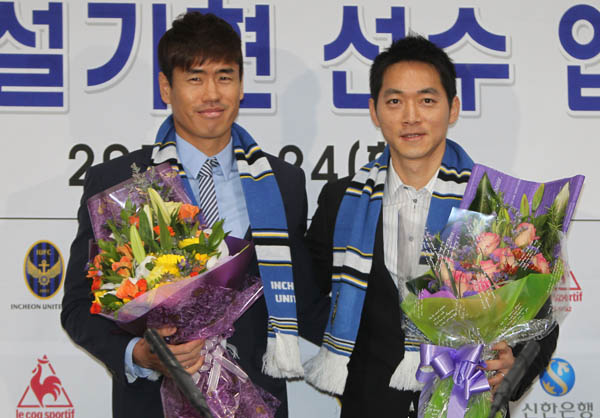 Veteran midfielder Kim Nam-il and attacker Seol Ki-hyeon, both crucial members of Korea’s semifinalist squad in 2002, were introduced as new players for Incheon at a ceremony held at City Hall. Coach Huh Jung-moo and Mayor Song Young-gil, the club’s owner, were also present.

“We were looking for a star born in Incheon, so we are very happy that Kim has signed up,” Song said. “We expect Seol will shore up our attacking line.”

Kim, who was born in the city in 1977, made his professional debut in 2000 with the Chunnam Dragons and was loaned to Dutch club Excelsior briefly in 2003. His last appearance in the K-League was with the Suwon Samsung Bluewings, where he played until 2007. The defensive midfielder later played for Japanese club Vissel Kobe and then Russian side Tom Tomsk.

Kim, who also played in the 2006 and 2010 World Cups, was reportedly looking to rejoin Vissel Kobe, but Huh, who managed him at the 2010 World Cup in South Africa, persuaded the player to resume his career at Incheon.

“I was hesitant to return because I was afraid of what might happen if I performed badly after having received so much support from fans since the 2002 World Cup,” Kim said. “But it is also tough living overseas, and Huh’s genuine interest in me touched me deeply.”

Seol said both Huh and Song played a major role in his decision to sign for the club.

“Huh really cares about my career, and I will do my utmost to have a good season,” Seol said. “Incheon may not be a contender for the tile, but the team can still deliver good results.”

The 35-year-old attacker started his professional career with Belgian club Antwerp in 2000 before moving on to Anderlecht, also in Belgium. He then headed to Wolverhampton, Reading and Fulham, all in England. He made his K-League debut in 2010 after signing with the Pohang Steelers, then shifted to Ulsan Hyundai last season and helped guide the club to the championship series despite beginning the playoffs as the lowest seed.

Huh said the two new additions to the team will pay dividends this season but also urged fans not to heap too much pressure on them in the early days. Incheon finished 13th in the 16-team league last season and left for spring training camp on the island of Guam yesterday to prepare for the new season.

“We have young players on the roster, and I think the addition of these two will be a valuable experience for them,” Huh said.