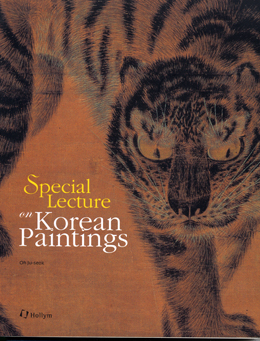 Oh Ju-seok (1956-2005) is one of the few Korean art historians who is known and loved by the public. He was able to explain old masters’ works in a thorough yet engaging way that captivated a broad spectrum of the Korean public. He also attached great importance to sharing his knowledge with the public, so he went on regular lecture tours around the nation. Even after his death at the age of 49 due to cancer in 2005, his books still remain on best-seller lists for books on art.

One of these books, “Special Lecture on Korean Paintings,” was recently translated into English and published by Hollym International.

Originally published in Korean in 2003, the book is a collection of Oh’s research and lectures and explores the vast heritage of Korean paintings.

Oh earned a master’s degree in archaeology and art history at Seoul National University and worked as a curator at the National Museum of Korea and some of the nation’s most important nongovernmental museums, including the Kansong Museum and Ho-Am Museum (now Leeum, Samsung Museum of Art). He was also a professor at Yonsei University.

In the first part of the book, Oh introduces the basic principles of Korean art by comparing ancient works with items more familiar to the people of today.

For example, the author explains how old Korean paintings should be viewed from the top right to the bottom left, since in many cases, the artists composed their paintings along this diagonal. He contrasts this with the modern tendency to view artwork from left to right because that is where most logos are placed in ads.

The second part, “Heart of the Ancestors Expressed in Old Paintings,” offers insight into the life and wisdom of ancient Koreans.

Oh explains Kim Hong-do’s (1745?c. 1806) painting “Sangbak” in a casual tone that makes the reader feel like Oh is lecturing in a small classroom. In discussing the famous painting, which illustrates a traditional wrestling scene, he compares traditional wrestling, where the players are fully dressed, even wearing padded socks, to wrestling today.

In the last part of the book, Oh focuses on old paintings from the Joseon Dynasty (1392-1897), writing that Korean portraits or calligraphy works were a true reflection of the spirit and mind of the people.

Oh uses a portrait of Chae Je-gong to describe how people in the Joseon era did not look straight at the artist when sitting for a portrait, producing an image that may seem strange and distant to viewers of today.

It is clear that Oh has great pride in Korean history and culture, yet he maintains his objectivity as an art historian throughout. While explaining the paintings, he also pinpoints mistakes the artists have made. When critiquing “Sangbak,” for example, Oh points out that a man in the lower right-hand corner has a right hand where a left should be.

Throughout the book, the author encourages readers to see the paintings anew, which he says will open doors for those who are willing to learn more about Korean art.