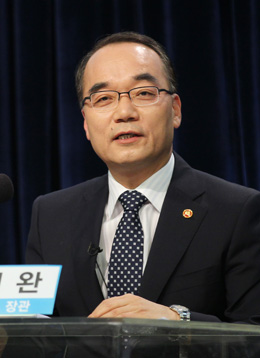 As part of efforts to strengthen both its mid- and long-term policies for pending social issues, such as Korea’s low birthrate and graying society, the Ministry of Strategy and Finance will establish a new division exclusively to handle such matters as early as next week.

The ministry, led by Minister Bahk Jae-wan, said the reshuffle it suggested earlier was authorized by high-level officials at a cabinet meeting yesterday, and will be executed once President Lee Myung-bak gives his seal of approval.

“So far, our policies have focused mostly on short-term agendas,” said an official from the ministry. “Establishing a department dedicated to promoting long-term strategic policies that look 30 years into the future will allow us to deal more efficiently with pending social issues such as the nation’s low birthrate, issues concerning female employment and affordable childcare, the high level of unemployment among young people and an aging society.”

The official noted that Korea has one of the world’s lowest birthrates, which drags down the country’s overall production and ultimately hampers its economic growth potential.

The global financial crisis, stemming from the euro zone and the slower than expected economic recovery in developed nations such as the United States, has already put a dent in Korea’s growth. Also, with more women entering the labor market and being offered higher-level positions, the country’s childcare system and policies - which have been neglected to some extent - now require closer attention as the government seeks more stable solutions. The new department tasked with building long-term policies will also be in charge of developing and supporting the country’s new growth engines, dealing with inter-Korean relations and finding resources to prevent the country from facing food security problems. Another matter that falls under its purview is the recent surge in the number of multiethnic families in the country, which has provoked social tension. The new department will monitor related problems as they arise and search for policies to help families adjust to Korean culture with as little inconvenience as possible.

Furthermore, the ministry said it has divided its international finance department into two divisions, one dealing with cooperation and another with policy. The former will deal with matters related to the G-20 Summit and meetings of finance ministers, effectively replacing the ministry’s former G-20 task force team.

Korea now regularly participates in about 50 international financial meetings a year, officials said, including the Asia-Pacific Economic Cooperation (APEC) gathering and the Asean+3. While the ministry said the reshuffle has created 21 new jobs, it is taking flak for reorganizing at a sensitive time ahead of legislative elections in April.