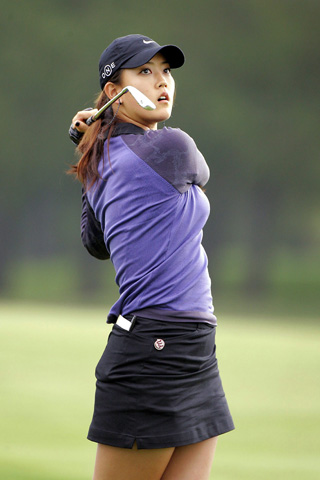 For Korean-American golfer Michelle Wie, last season turned out to be a less-than-average season. While juggling classes at Stanford, where she has been enrolled since 2007, and playing golf on the LPGA Tour, Wie did make seven top-10 finishes in her 20 events, but failed to win once.

Her best finish came at last season’s opening tournament, the Honda LPGA Thailand in February, in which she finished runner-up behind Yani Tseng of Taiwan. Wie also tied for second at the CN Canadian Women’s Open in August.

The 22-year-old from Hawaii has previously expressed her passion for the pursuit of academic degrees despite criticism from her peers, including LPGA Hall-of-Famer Annika Sorenstam, about not devoting herself to golf. Wie stands by her belief “in the importance of education for all young people.”

Although the Korean-American, who is majoring in communications, may not have earned a perfect grade point average (she revealed her GPA is higher than 3.0), Wie is just months away from graduation. With classes ending in March, many pundits are expecting a break-out performance this season.

Her graduation may also lead to a surge in crowds at LPGA Tour events. The Tour has been focusing efforts this season on increasing fan attendance in addition to promoting high-quality play from golfing stars.

Mike Whan, the LPGA’s third-year commissioner, said the Tour has never been better and mentioned three story lines that will catch the attention of fans this season.

Wie’s life on the golf course after graduating from Stanford was one of them. The other two were Tseng’s rising performance and 16-year-old Lexi Thompson playing in her rookie year.

Last week, the JoongAng Ilbo conducted an e-mail interview with Wie to ask about her life at Stanford and her upcoming plans for the year.

Q. How difficult has it been for you to keep up with classes while playing on the LPGA Tour?

A. It has been a big challenge, but I knew when I enrolled at Stanford that it would be a reward that lasted a lifetime. I’m just 22 years old, and have a long career ahead of me as a golfer. My time at Stanford has given me a balance in my life that is very important to me. I’m very thankful for my experience at Stanford and believe that it will help me as a golfer in the years ahead.

Many are expecting a lot from you once you graduate. What are your own expectations?

I’ve always said that the expectations I have for myself are greater than any that others can put on me.

I’m looking forward to graduating from Stanford this year and then being able to devote all my attention to achieving my goals on the golf course.

The LPGA is making moves to restore the Tour’s popularity. Do you think your graduation will play a positive role in this movement?

We’re all very excited about the events added to the LPGA Tour this year and the growth in popularity in the game. We’re lucky to have a lot of great talent from all around the world and I do think that my graduation will send a positive message to young people, especially young girls, about the importance of education. Hopefully those young people become the future fans for our game.

In your opinion, what does the LPGA need to do in order restore popularity?

I think we’re already seeing that growth in popularity. We’ve added a number of new events to the schedule in 2012 and it’s a result of the talent of the players around the world, the support of the tournament and sponsors, and a great vision from the Tour’s commissioner. I’m very excited about the future of women’s golf and the LPGA Tour.

Korean sponsors have also increased. What do you think of this as a golfer of Korean descent?

With my Korean roots, I do feel a great sense of pride to have those sponsors involved, especially Kia as one of my own sponsors. Their enthusiasm and investment is a very important reason why the popularity of women’s golf is growing so quickly around the world.

My goal each season is to always get better and put myself in a position to win tournaments, but this year will be a special one as I graduate from Stanford this summer. I want to enjoy that accomplishment and then focus on being the best I can be on the golf course. It’s an exciting time in my life.

Did you finalize your schedule for this season?

I am still finalizing my LPGA Tour schedule in coordination with my class schedule during my final quarter at Stanford University.

Have you talked with Tiger Woods, who also went to Stanford?

I haven’t had the chance to meet him, and I do think he will get back to winning tournaments again. I think it’s good for all of golf when we have an athlete as popular as Tiger and he’s doing well.