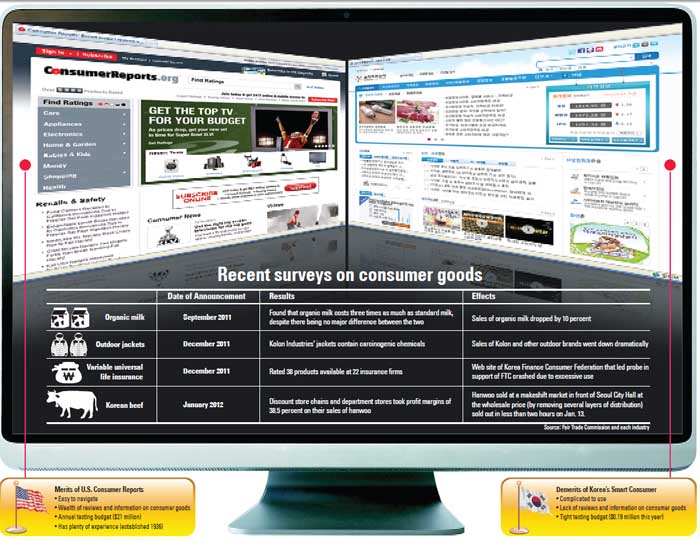 Consumers have replied with mixed feedback to the government’s recently launched online report of consumer prices, suggesting that much tweaking and additional input is required in terms of user-friendliness and content.

On Jan. 11, the Fair Trade Commission (FTC) launched Smart Consumer, giving people an open platform on which to find accurate information and detailed reviews of products before making a purchase.

The Web site (http://www.smartconsumer.go.kr/), which is modeled after the U.S. Consumer Reports, is still in its infancy and has glaring omissions that have yet to be filled in. It also puts an emphasis on services more slanted toward Korean consumers, such as home tutoring, as well as daily products such as premium baby formula, and popular items like low-cost carriers. Apart from its limited content, the key difference from its U.S. precursor is the operator.

Whereas the U.S. version is run by Consumer Union, a nonprofit organization, and works via paid subscriptions, Smart Consumer is managed by the Korean government and the information it offers is free.

The commission is prioritizing items that have gained notoriety among the public for being overpriced, with one example being hanwoo, or Korean beef, which was added last Thursday.

From March, the FTC will enlarge its library of goods and prices to include hiking boots, bottled water, digital TVs, smartphones and other familiar household goods that have come under the microscope recently for being unfairly priced.

It will also include imported goods that are much more expensive in Korea than overseas, and the exact price differences. Items include baby strollers, health supplements and lines from fast fashion retailers like Zara and Uniqlo.

Experts said that consumers have been craving a place where they can find reliable and accurate sources of information on products. Demand rose last year when the anti-trust agency slapped fines on bloggers for urging netizens to buy products from their sites without admitting that they were receiving commissions on the goods.

The FTC responded by announcing that it would release a site to iron out such kinks on par with Consumer Reports, the U.S. consumer magazine and Web site that publishes reviews and comparisons of consumer products and services based on results from its in-house testing laboratory.

“Tons of reviews of products are already available in cyberspace, but many of them are biased because they praise specific manufacturers without providing subjective reviews or comparisons with rival products,” said Kim Joon-beom, an official at the FTC. “People have been clamoring for a reliable source of information from unbiased experts and a trustworthy organization. This is why the reviews released by consumer rights groups supported by the FTC have been so popular.”

However, others complain that Smart Consumer is awkward and confusing to navigate and lacks sufficient content.

“The Web site isn’t user-friendly at all,” said Kim Hyeong-jeong, a 30-year old Web site designer. “Too much information crushed into a limited space makes it look over complicated. If the government wants to attract more consumers, it must redesign it in a simpler way.”

Kim said it took him just a few minutes to navigate the U.S. version, but considerably longer to get to grips with its initially mind-boggling Korean cousin.

Consumer Reports puts “find ratings” on the home page of its Web site and separates products into categories such as cars, appliances, electronics, home and garden, and money. In contrast, Smart Consumer bundles as many topics into one space as possible, meaning the user has to sift through them to find what they are looking for. Industry insiders have also questioned the objectivity of the Korean Web site as it is run by the government, which means it could be taken advantage of to promote nationwide anti-inflation campaigns given its strong level of influence.

This was evidenced last summer when the FTC announced that organic milk was being sold for three times the price of standard milk, despite there being scant difference between the two in terms of nutrition. After the news was released, sales of the former dropped by 10 percent.

The milk industry responded by attacking the FTC for deliberately targeting it at a time when it considered raising prices.

“This study dealt a severe blow to the industry, and organic milk sales decreased substantially,” said one industry source, who asked not to be named. “I’m concerned the government will take advantage of the Web site for its anti-inflation push, and that it will investigate items based on political interests.”

Another pitfall of the Smart Consumer site is its extremely tight budget.

One FTC official said that the agency only investigated the quality and price of nine relatively cheap products last year, including milk, fruit juice and ham, because of its tight budget of 98 million won ($87,000).

“U.S. Consumer Reports tests the quality of more expensive products including cars, TVs and personal computers by buying such products with the money it earns from subscription fees,” the official explained. “Our budget increased to 220 million won this year. But given the aim to probe 10 items this year, we will probably be forced to focus on cheap products again.”

In contrast to the Korean site, Consumer Reports boasts over 7 million print and online subscribers and its annual testing budget is approximately $21 million.

In 2010, the U.S. magazine rated the 2010 Lexus GX 460 SUV unsafe after the vehicle failed one of the magazine’s emergency safety tests, which led Toyota to issue a recall.

An ongoing survey at Smart Consumer asks visitors what the Web site needs to improve the most.

The majority of participants named lack of content as the main concern, particularly information and reviews of products. Some 16 percent criticized the way the Web site was designed, and the same proportion blasted its search function.

“If their budget doesn’t increase next year, consumers seeking test results and reviews of expensive electronic goods will lose interest in the site,” said one official at a consumer rights group.