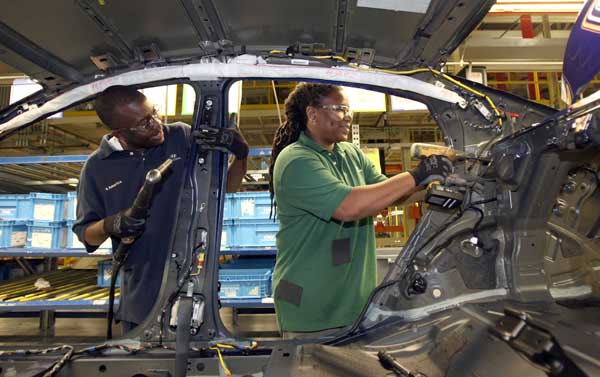 Hyundai Motor employees assemble components at the automaker’s Alabama plant in the United States. Provided by the company

Korean companies are increasingly finding labor conflicts to be one of the biggest headaches, or risks, as they move to expand their operations overseas.

Last month, around 8,000 Chinese workers at a factory operated by LG Display in Nanjing, China, went on strike against the company’s unfair distribution of wages. The employees claimed that Korean workers at the plant were given a year-end bonus equivalent to half a year’s salary, but the Chinese workers only received one month.

This labor conflict led the world’s second-largest maker of flat panels to halt operations at the plant for three days and resume them only after the management agreed with the Chinese workers to give them an improved bonus of two month’s salary.

LG Display is not alone in dealing with these swelling headaches from unhappy foreign workers. 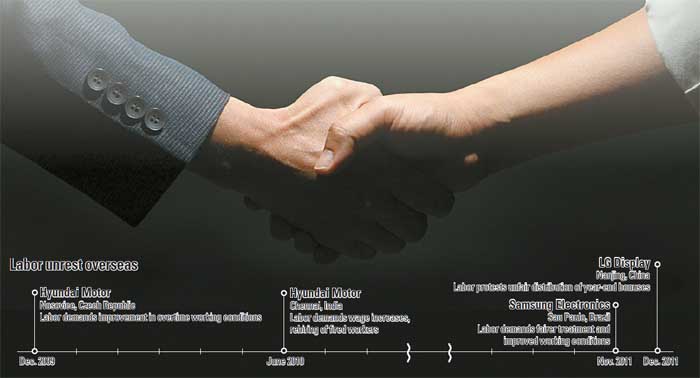 Korean firms that have entered overseas markets to escape the saturated local market, where profits are drying up, are increasingly struggling to stay on good terms with their foreign labor forces.

Hyundai Motor, the country’s largest automaker, has been forced to halt operations repeatedly at its Indian plant in Chennai, as workers there demand wage increases each year and complain about being overworked.

The plant is considered one of the automaker’s most important manufacturing facilities, along with its facility in the United States, and the labor conflict there has played a significant role in dampening its overall global production.

Samsung Electronics also recently tussled with staff at its mobile phone manufacturing facility in Brazil as scores of local hires protested having their working hours restricted.

Meanwhile, a research fellow of the Korea Labor Institute said that localization is the key [for Korean businesses to efficiently communicate with local workers]. “The challenge that every firm faces when they enter an overseas market is how to treat local workers differently according to what industry and country they are in,” the fellow said.

Park Young-beom, a professor of economics at Hansung University, said small firms face more difficulties in dealing with unionized workers, “as they do not understand how to deal with them properly.”

“Most of the conflicts encountered by small firms concern wages as companies wish to cut labor costs,” he said.

An official from the Ministry of Knowledge Economy’s overseas investment division said, “We will enhance our support of Korean firms operating overseas and help them resolve their labor issues.”

In some regions, Korean companies eschew the issue by prohibiting unions at their foreign plants. Hyundai Motor and Kia Motors, the country’s two largest automakers, are known for their stubborn and vocal unions at home but do not have a labor union group at their factories in the United States. Hyundai has a manufacturing facility in Alabama, while Kia has one in Georgia.

“[U.S.-based] United Auto Workers has been continuously pushing Hyundai and Kia to establish labor unions, but its efforts have been in vain,” said an official from Hyundai Motor Group, which owns the two carmakers. “We offer various welfare and training programs to our American factory workers, and they are sufficiently satisfied that they don’t need a labor union to represent them.”

Hyundai selects 100 to 200 overseas factory employees every year and sends them to Korea to train and visit research and manufacturing facilities. Kia does the same.

“The UAW has to convince workers that they need a union when, in fact, without a union they got what they consider to be one of the best jobs they’ve ever had: A good manufacturing job with a company that’s expanding,” Gary Chaison, a professor of industrial relations at Clark University in Worcester, Massachusetts, was quoted by Bloomberg as saying.