Hard-toiling sniffer dog ready to put his paws up

Hard-toiling sniffer dog ready to put his paws up 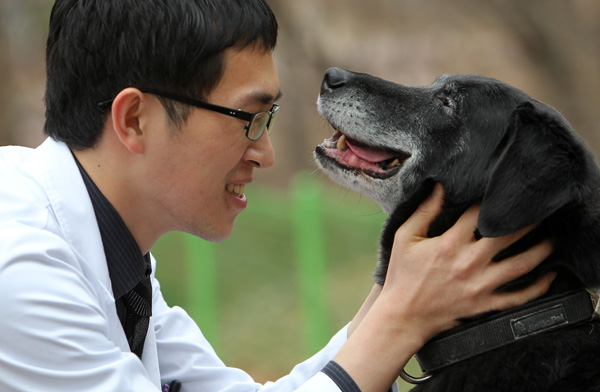 Edge, an 11-year-old Labrador Retriever sniffer dog and blood donor, is stroked by veterinarian Lee Gwan-gu, who supervises his exercises at the Seoul National University Hospital for Animals. By Kim Do-hoon

A Labrador Retriever that has worked his tail off for nine of his 11 years is being retired.

Edge, a 65-centimeter Lab with sleek black fur, worked at Incheon International Airport as a sniffer dog with a keen nose for methamphetamine and hashish from 2003 until 2008. 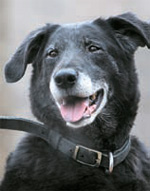 For the next three years, Edge was a professional blood donor for fellow canines in need. His blood saved the lives of some 50 dogs.

Born in the United States on Jan. 1, 2001, Edge was brought to Korea the following year by handlers of the Korea Customs Service.

Edge began training to become a detection dog in the summer of 2002 with nine other dogs. Only two in the class graduated to become sniffer dogs.

He had four to five one-hour shifts a day trying to find drugs being illicitly shipped into Korea. Dogs have senses of smell 40 times as acute as that of human beings.

Over six years, Edge sniffed out eight cases of illegal trafficking of drugs worth 350 million won ($311,000), some concealed with a high level of ingenuity.

When his olfactory sense started to weaken, Edge gave up his leash to allow younger pups to take his place.

But at the Seoul National University College of Veterinary Medicine, Edge began his second career as a blood donor.

For dogs to become blood donors, they have to be healthy, well vaccinated, free of anemia and weigh over 27 kilograms (59.5 pounds). There are 13 types of blood in dogs.

Edge is so accustomed to having blood drawn that he doesn’t flinch when the needle goes in. He simply shuts his eyes.

One veterinarian describes him as a “calm man of religion” for his composure and quiet dignity.

And reaching a ripe age in canine years, Edge - the glossy black fur around his chin now whitened - is ready to put up his paws in a warm home looked after by a caring owner. He seems almost certain to get one.

After the JoongAng Ilbo reported yesterday that if Edge didn’t find a home he may have to be euthanized, the response was so overwhelming that Seoul National University Hospital for Animals is no longer accepting offers and doesn’t even want any telephone inquiries.

“There have been so many inquiries regarding Edge that it is disturbing our hospital’s work,” stated one worker at the hospital yesterday afternoon. The hospital hasn’t announced the name of Edge’s new owner.