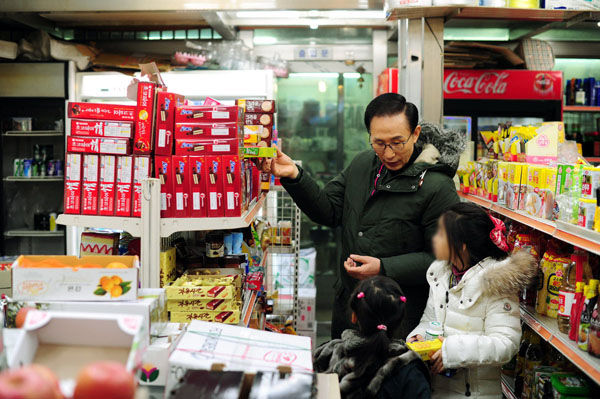 President Lee Myung-bak buys cookies for his granddaughter in her attention-catching jacket on Jan. 2 at Tongin Market in Jongno, Seoul. [NEWSIS]

The hottest topic of debate on the Internet during the Lunar New Year holidays was an overcoat of President Lee Myung-bak’s granddaughter, which critics say was way too expensive and ostentatious.

Lee supporters cried foul, countering that the granddaughter of the late former President Roh Moo-hyun has some pretty over-the-top items in her closet as well.

The controversy began when the Blue House posted photos of the presidential family’s visit to Tongin Market near the Blue House on Saturday. Lee and First Lady Kim Yoon-ok were accompanied by their younger daughter, a daughter-in-law and two granddaughters.

The next day, some sharp-eyed netizens claimed one of the granddaughters was wearing a white down jacket from the French fashion house Moncler that sells for 3 million won ($2,666). The news spread quickly through social networking services.

According to industry sources, Moncler jackets for kids are priced at 800,000 won or higher in Korea, although they can be bought at about half that price in department stores in the United States and Europe.

Lee supporters weighed in complaining that the critics were attacking the president unfairly. After the critics posted photos of the family of the late former President Roh Moo-hyun to show their frugal ways, Lee supporters pointed out that a granddaughter of Roh was wearing outfits from another luxury fashion house, Burberry.

Other netizens said the Blue House should have known that the presidential visit should dress down for a trip to a traditional market.

The Blue House removed the photos from its homepage Monday. But that didn’t stop the carping.

“The luxurious padded jacket of the presidential granddaughter, whether it cost millions of won or not, created an ineradicable scar on the hearts of the working-class people on the lunar New Year holidays,” Representative Kim Yoo-jung, spokeswoman of the Democratic Unity Party, said Tuesday. “The true nature of this administration, serving the top 1 percent of the rich people, will never be obscured by the occasional visit to a traditional market to eat snacks and shake hands.”

Analysts said the debate was on a picayune subject but reflected deep levels of animosity toward the president. “Picking on the granddaughter’s outfit is just an emotional expression of some people’s hatred toward Lee,” said Whang Sang-min, a professor of psychology at Yonsei University.