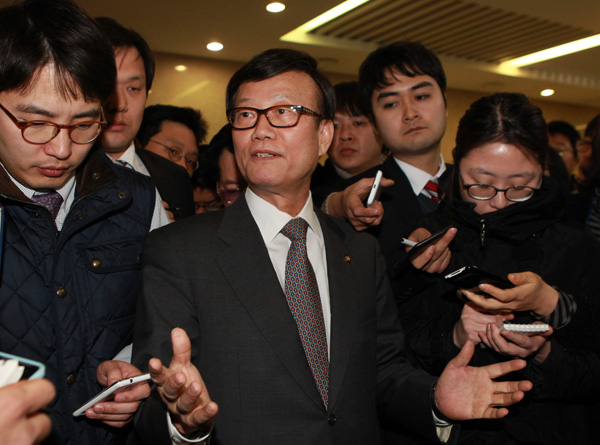 Representative Yoon Jin-sik, center, of the ruling Grand National Party, holds a news conference yesterday at the National Assembly to deny the allegation that he received illegal political funds from a suspended savings bank in 2010. The prosecution sources said prosecutors recently secured a statement from Ryu Dong-cheon, former chairman of the suspended Jeil Savings Bank, that he gave about 30 million won ($26,600) to Yoon, a close aide to President Lee Myung-bak, who was a candidate for a parliamentary by-election in Chungju, South Chungcheong. Prosecutors are reportedly planning to question Yoon for potential indictment. Yoon served as a senior secretary for economic affairs and a chief policy secretary to President Lee from 2009-10. He was elected as a Grand National Party legislator during the 2010 by-election. After Jeil Savings Bank had its business suspended late last year due to illegal lending and a capital shortage, its chairman was indicted on charges of bribing a number of politicians and public officials to avoid being closed down. By Kim Hyung-soo