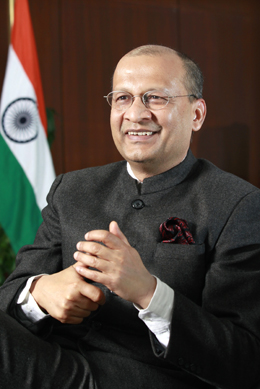 Korea and India are actively trying to boost their bilateral trade to deepen already healthy diplomatic relations, according to the new Indian ambassador to Korea.

Vishnu Prakash, who arrived in Seoul on Jan. 12, said in an interview with the Korea JoongAng Daily that India, inspired by the success of the Comprehensive Economic Partnership Agreement with Korea, is eager to expand the ties further.

“We already want to further upgrade CEPA, which is just two years old, and that shows how effective it has been,” Prakash said during an interview held at the Indian Embassy in Hannam-dong, Seoul. “We perceive it as a very successful effort.”

The Korea-India CEPA, signed in August 2009 and implemented in January 2010, will eliminate or lower import tariffs on 85 to 90 percent of the goods traded between the two countries over the course of a decade.

Since 2010, the two sides have had two director general-level meetings to assess and improve the pact.

The last one was held in Seoul last September, at which the two sides agreed to the possibility of moving up the timeline to fully abolish or lower tariffs, according to an official of the Ministry of Foreign Affairs and Trade. The two sides are working to come up with specifics for further negotiations, the Seoul official said.

There are many areas in India that can benefit from cooperation with Korea, including infrastructure development, the ambassador said.

India plans to scale up its infrastructure investment from 6 percent of its Gross Domestic Product to 8 to 9 percent beginning this year to equip one of the world’s fastest growing economies with roads, highways, subways and airports.

“This is one of the areas in which I think we have a good opportunity to collaborate closely,” Prakash said. “For example, we have a very successful metro that has been operationalized in New Delhi. We are building one in Bangalore. Korea is supplying wagons for the metro and they are very well received.”

Another area the ambassador mentioned in terms of bilateral cooperation is the civilian nuclear sector.

India, which currently generates 5,000 megawatts of electricity from nuclear plants, or only 2 percent of its energy demands, plans to increase that amount to 60,000 megawatts by 2030.

Economic and commercial ties are the main pillars of relations between Korea and India, the ambassador concedes. But, he said, the two countries are also getting closer in terms of people exchanges. About 100,000 Indians and Koreans are visiting each other’s country every year, he said.

Prakash, who replaced Skand Ranjan Tayal as India’s top representative in Korea, said he “insisted” that he come to Seoul as ambassador because he was so interested in the East Asia region, which he said is increasingly important for India.

The 55-year-old ambassador, with more than 30 years of experience as a diplomat, has served as consul general in both Shanghai and Vladivostok, Russia, and as a political counselor in Tokyo. Before coming to Seoul this month, he served as the spokesman of India’s Foreign Ministry for two and a half years.

“I’m hoping India-Korea relations will become one of the top 10 relations for both of our countries, and we are well on the way to doing that. We have convergence of interests, and I think we are only limited by our imaginations,” he said.