Park will not join int’l squad

Park will not join int’l squad 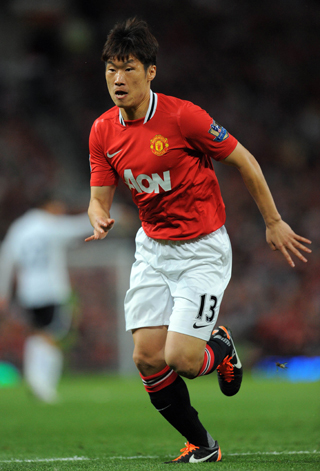 Manchester United midfielder Park Ji-sung confirmed that he is not planning on joining the international squad, squashing rumors that he might rejoin the national football team to help them reach the 2014 FIFA World Cup.

In an interview with Ilgan Sports, the JoongAng Ilbo’s daily sports newspaper, on Wednesday, Park emphasized he will not reverse the decision he made last year to hang up his international jersey.

The 31-year-old announced his national team retirement with veteran defender Lee Young-pyo after the 2011 Asian Cup.

“If I had thoughts to return, I would have never made the retirement announcement,” Park said. “I don’t think the national team could overcome the difficult situation with just a player like me returning to the team.”

Korea, currently No. 30 in the FIFA rankings, replaced its coach last December after a shocking 2-1 defeat to Lebanon. Fans have pleaded with Park to return to help the troubled national team.

The Taeguk Warriors, now coached by Choi Kang-hee, host Kuwait on Feb. 29 for the third round of the Asian qualifiers for the 2014 FIFA World Cup.

The team leads Group B, but if it loses to Kuwait and if Lebanon, which has the same points as Korea but is behind on goal difference, beats or draws with the United Arab Emirates, Korea loses its chance for an eighth consecutive World Cup. In this scenario, Kuwait and Lebanon would advance.

Park said all team members should concentrate and work hard to push through the difficult situation and that he expects a strong showing from them.

“Those reports that our team is in crisis may affect players, but if players perform like they have been doing and concentrate, there will be a good result,” the former national team captain said. “The national team is better than Kuwait, so I just hope players don’t think too much on the match.”

Since his national team retirement, Park has been fully committed to his club Manchester United, which beat Arsenal 2-1 on Sunday.

Against Arsenal, Park came on in the 76th minute and played a part in Danny Welbeck’s game-winning goal with a one-two pass with Antonio Valencia. He competed against his compatriot, Arsenal striker Park Chu-young.

“I didn’t have special feelings about encountering Chu-young,” Park said. “Perhaps it’s because there are other Koreans playing in Europe and I have played with them before.”

Park said he did have a long conversation with Park Chu-young, who made his EPL debut since joining the London club last August, after the match. While the Gunners striker sees little playing time, Park said he believes the current national team captain knows what to do with his situation.

“Chu-young has amassed experience from an early age and it’s not the first time he has played in Europe, so I believe he knows what do,” Park said. “I think he knows that committing his duty faithfully and not feeling discouraged is an important thing.”

Park, who joined the Red Devils in 2005, is now considered a veteran player. He said nothing has changed much in his role and status, but he continues to play harder.

“Since I have more experience than some other players, I think I need to play better on the pitch, using my experience,” Park said. “As time goes by, young players come and go at this club, but the important thing is that you need to adjust to the changing environment.”

For this season, the Korean workhorse previously stated he wanted to score 10 goals, but so far, he has managed to get only two. Park said he will concentrate in the remaining matches to meet his target.

“It feels bad that I have only scored two since I had scored five goals by this time last season,” Park said. “But since there is the second half of the season, you never know until the end.”

Outside football, Park has been harassed by the local media alleging that the footballer is dating a former Korean beauty pageant in Japan.

The news was denied by his father and agent. For Park, it was also a sensitive issue. “I don’t want to even mention the scandal. If I say something on that, it will generate other news,” he said.