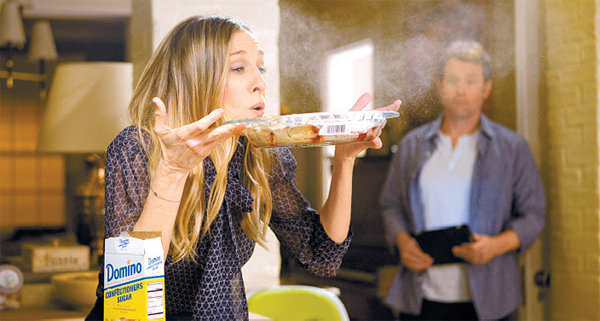 Sarah Jessica Parker plays the role of a working mother who is obsessed with being perfect at work and home in “I Don’t Know How She Does it.” Provided by Noori Pictures


When you’re a wife and working mother, there’s this inescapable, self-imposed pressure to do everything right all the time. The idea of having it all - a great job and a loving family, a toned body and a sane mind - is as appealing as it is elusive.

“I Don’t Know How She Does It,” based on the best-selling novel of the same name, gets that dynamic, that incessant juggling act, and the ways in which we self-flagellate in trying to perfect it. This is not exactly a new concept but it’s increasingly prevalent - the complications are greater these days than ever - and director Douglas McGrath finds just the right tone in depicting that. Sometimes.

Too often, though, he smothers those nuggets of insight with a jaunty, sitcommy tone, with gags that are telegraphed from a mile away and music that works awfully hard to cue our emotional responses. You know the second that a character speaks wistfully of going bowling as a kid that we will eventually end up at a bowling alley. And just as surely, our heroine’s seemingly insurmountable troubles will get wrapped up at a snappy pace and in a speedy running time.

It doesn’t help that Sarah Jessica Parker, as the film’s star, chimes in early and often with voiceovers that sound exactly like the kinds of observations she used to make as Carrie on “Sex and the City,” the role with which she will be eternally, intrinsically tied. “I Don’t Know How She Does It” suggests what might have happened to Carrie if she had two kids with Mr. Big to worry about, and less time to obsess over her wardrobe.

Here, as Kate Reddy, she’s usually a mess: shirt partially untucked, hair uncombed, a splotch of breakfast lodged in a crusty clump on her blazer. Kate is an investment manager at the Boston office of a big New York financial firm, which already takes her away too often from her husband (Greg Kinnear), their 6-year-old daughter and 2-year-old son. But when she pitches an ambitious project to the firm’s head honcho (Pierce Brosnan), just as her husband gets a new gig, they both find themselves even more crazed.

McGrath is working from a script by Aline Brosh McKenna, who has shown a knack for writing this particular type of Type-A, modern woman in “The Devil Wears Prada” and “Morning Glory.”

Parker has always been game for physical comedy and she gets plenty of opportunities to show off those veteran skills here, but she’s also maintained a girlish vulnerability - that petite body, that tiny voice - that endears her even further.

Which is why it’s so frustrating when McGrath features supporting characters speaking directly into the camera about Kate as if they were taking part in a documentary about her. Rather than providing a sense of intimacy, as if we’re being let in on some juicy secrets, this device holds us at arm’s length and it doesn’t make much sense within the straightforward structure of the rest of the film.

Not that any of this matters. The very women this film targets are too busy to go to the movies anyway.

“I Don’t Know How She Does It” will be released at theaters nationwide on Feb. 2. AP