Smartphone film fest gears up for another year of breaking barriers

Smartphone film fest gears up for another year of breaking barriers 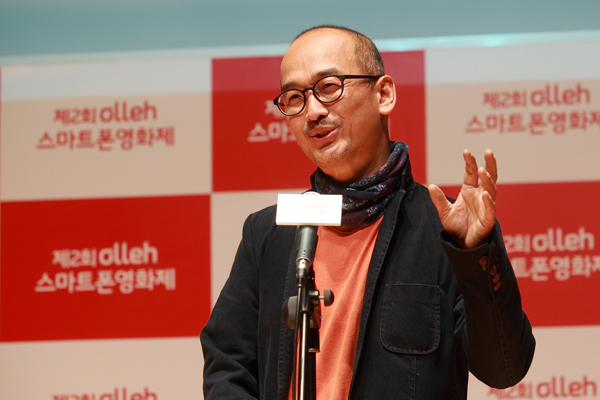 Director Lee Joon-ik outlines plans for the second Olleh Lotte Smartphone International Film Festival, which runs from March 19 to 21. In addition to directing the festival and judging, Lee will also put together the opening film, which is conceived as a public collaboration to be made in 30 hours. Provided by KT

When the first smartphone film festival was organized here in Seoul two years ago, making a short film with the gadget was considered a fun gig for most filmmakers.

Director Lee Joon-ik even jokingly said that he had signed up for the festival just to get the latest iPhone from KT, the festival organizer and the first company to bring the device to the local market in 2009.

“I appeared in a smartphone film because I thought I’d win an iPhone,” director Lee Joon-ik told reporters during the first iPhone film festival in 2010. The festival challenged 12 renowned Korean filmmakers and cameramen to make short films with the gadget. The film about Lee was made by cameraman Jeong Jeong-hun, who bet the restless director that he couldn’t sit in a room and do nothing all day. The prize was one of the phones.

Since then, the festival, re-branded last February as the Olleh Lotte Smartphone International Film Festival, has blurred the lines between professional filmmakers, rising amateurs and home movie hobbyists. 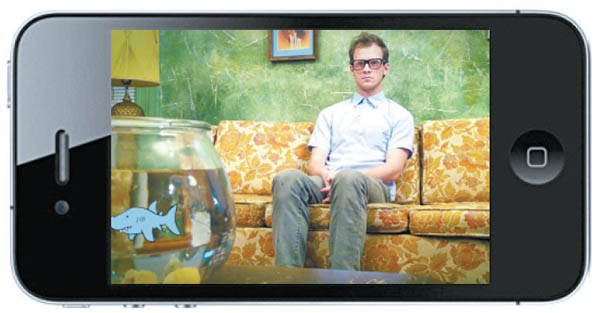 A still from the U.S. smartphone film “Sharkoon”

“Smartphone films could dismantle the current film industry, which has been dominated by a select number of professional filmmakers,” said Lee, who is famous for his 2005 hit “The King and the Clown” and the director of this year’s festival, which runs from March 19 to 21.

“When a few people monopolize a certain industry, they come to have power, and I’m one of the few who dominates the nation’s film industry,” Lee told reporters earlier this month during a press conference. “But I believe smartphones will bring down the barrier between professional directors and ordinary people.”

The main format of the festival remains the same as it was a year ago, though it has expanded in scope.

Anyone can participate in the festival, regardless of age or nationality. People who want to participate can do so by uploading their creation to the Web site (www.ollehfilmfestival.com) before Feb. 12.

Starting this year, there are two categories for entries: one for experts who study film or work in the industry and another for people with little knowledge about filmmaking.

The films will be judged by a panel of eight filmmakers and camerapeople, including Lee, and the six winners will be screened at the festival.

The suggested running time for all entries is 10 minutes, though the guidelines also say that films can be longer.

Lim Pil-sung, one of this year’s judges and the director of the upcoming “Doomsday Book,” pointed out at the press conference, however, that “none of the films from last year’s festival were longer than 10 minutes.”

In addition to the films in competition, this year’s festival will screen eight films from the iPhone Film Festival in the United States and Hong Kong Mobile Film Festival.

Festival programmer Yu Sun-mi offered her recommendations of films from this section.

The action-packed British smartphone film “The Commuter” centers upon a man who is chased by a mysterious group of people on his way to the office for his first day of work. British actor Dev Patel, who starred in “Slumdog Millionaire” (2008), plays the Commuter; American actors Pamela Anderson and Ed Westwick (“Gossip Girl”) make cameo appearances.

Another action film that is part of the festival, “Goldilocks,” directed by Anna Elizabeth James and Michael Koerbel, is the latest creation of the duo who made “Apple of My Eye,” widely considered the world’s first iPhone film.

Also recommended is the British stop-motion film “Dot,” which is 1 minute and 37 seconds long.

The film was produced by the U.K.’s Aardman Animations, which has produced many hits including “Arthur Christmas,” (2011) “Wallace and Gromit” (2005) and “Chicken Run” (2000). The film was shot with a Nokia smartphone for promotional purposes in 2010.

Also on the screening list is “Sharkoon,” a fantasy film by Americans Dan Bakst and Dan Nguyen about an encounter between a man and an invisible miniature shark.

But the highlight of the festival is sure to be the opening film, the theme of which is still unknown.

The film is conceived as a semi-spontaneous public collaboration and will be made in 30 hours. Anyone can upload video clips between 12 p.m. on March 18 and 12 p.m. on March 19. The footage must be shot within that time frame and the theme of the film will be announced in February.

Lee will then take five hours to pick, edit and develop the clips into a single short film and the final product will be screened on the day of opening ceremony on March 19.

“The biggest issue in the mobile industry is how fast you can download a single file and send it to someone else,” said Yu, the festival programmer. “So we will have its world premiere on social networking sites on the opening day of the festival.”

Several of the judges commented on what they hope to see from this year’s films.

“Smartphones are much lighter than traditional filmmaking equipment,” Yun said. “What I want to see from smartphone films is that they make the most of the devices during the filming process.”

Bong Man-dae, the director of the 2009 thriller “Handphone,” said, “I want to see how the filmmakers communicate with the world through their smartphone films.”

The films in this year’s festival will be screened through diverse channels including Olleh.com, Olleh TV and at Olleh Square in Gwanghawmun, central Seoul. Olleh is the brand name of KT’s landline, mobile phone, IPTV and high-speed Internet service.